NATO is poised to begin crafting a new strategy that will ultimately inform how its member-nations apply autonomous capabilities in future conflicts, according to a senior official.

The alliance relatively recently announced its intent to develop detailed plans to accelerate responsible innovation and adoption of emerging and disruptive technologies across nine key technology areas, including autonomy.

At a summit in Washington on Friday hosted by the new Special Competitive Studies Project, NATO Assistant Secretary General for Emerging Security Challenges David Van Wheel told reporters: “When I get back [to Europe] — I think it’s next week, already — we’re going to start negotiating with the allies on that” autonomy document.

Those involved intend to release the autonomy strategy to the public before the end of the year.

The new guidelines will come on the heels of the AI strategy that the transatlantic alliance recently released.

The guidance will likely follow “a lot of the lines that we did in the AI strategy,” Van Wheel noted, so officials will be “looking at responsible use of autonomy” and “common standards that we expect for the allies to adhere to.”

In his view, autonomy is one of a few of the overarching technology areas for which deeply exploring moral and ethical implications will be important. To help build trust, NATO intends for this strategy — like the one on AI — to include as much unclassified information as possible.

The new document will be developed as Russia and Ukraine engage in warfare that in some ways is notably different than previous fights.

“Basically, what we see in Ukraine now looks very much like a conventional, classic war. But if you look closer, then you see that innovation is playing a larger role in this war than it has done in any war in history. Innovation really gives an edge over an opponent because you have new capabilities and better capabilities to actually strike,” Van Wheel said.

“Before, all these innovations were driven by the defense sector. Nowadays, they’re all driven by the commercial sector,” he added.

AI is playing a significant role in the Ukraine-Russia war, he noted.

“The night before the invasion, an AI predicted a traffic jam on the roads in Belarus,” he said.

Using apps, Ukrainian citizens can send alerts to their government, according to Van Wheel.

“In Ukraine, they can actually post pictures of tanks they see in the streets or enemy positions. And with the use of AI, they get a comprehensive countrywide picture of movements of the enemy,” Van Wheel said. “So, they’re doing it in a great way and we’ve definitely been learning.”

Ukraine’s success is partly due to how savvy soldiers are actually adopting and adapting with technology As an example, Van Wheel pointed to what NATO members refer to as Ukraine’s “Uber for artillery.”

“Now in the Ukrainian Armed Forces, [officials can] pinpoint to an enemy position on the map, and then AI will calculate which system is best placed to provide the fire … [After] pinpointing, they’re able to deliver fire on the target within 20 to 30 seconds. That is unbelievable,” Van Wheel said. “It’s developments like that that are now under pressure, coming to bear, that we’re trying to incorporate in our peacetime modes of work to unleash that potential that is already there to create new opportunities.” 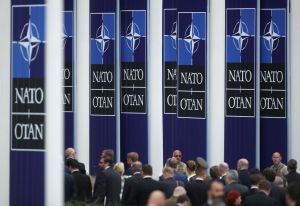