The Pentagon’s new Chief Digital and Artificial Intelligence Office (CDAO) just achieved full operating capability, and Deputy Secretary of Defense Kathleen Hicks wants it to show clear progress on key initiatives such as Joint All-Domain Command and Control within the next year.

The CDAO — a product of a major bureaucrat shakeup at the Pentagon that included the merger of several agencies — is tasked with scaling digital and Al-enabled capabilities across the massive Department of Defense enterprise. On June 1 the office announced that it had achieved full operating capability (FOC) as well as the appointment of nearly a dozen officials to fill out its leadership ranks.

“I do think it’s really important to empower the team there to first of all take a little time, as they’ve put themselves together in FOC to think through that problem set themselves and put some measures out that we can talk about. So I’m not going to get in front of that process,” Hicks said Wednesday at the DOD’s annual Digital and AI Symposium.

“What I will say is that we have to be able to deliver. We have to advance and advance quickly on the challenge set that the warfighter faces,” she continued. “The CDAO has to be seen a year in as delivering on that and that it is the go-to place for talent and technical expertise to get after that problem” of Joint All-Domain Command and Control (JADC2) and scaling artificial intelligence across the department, she added.

JADC2 is the Pentagon’s vision for better connecting the U.S. military’s sensors and shooters, and creating faster and more unified networks through the application of AI and other digital tools.

“What we want to be able to do is make sure we are leveraging the state of the art in order to increase accuracy, increase speed of decision-making, increase the quality of our ability to deliver effects,” Hicks explained.  “We need to be able to access the data that’s out there.”

The Pentagon also wants to leverage artificial intelligence and big data analytics for back office and “board room” functions — not just on battlefields, she noted. That includes applying the technology to logistics, sustainment and inventory management issues, among others.

The DOD is currently “under-gunned” when it comes to analytic capabilities, Hicks said.

To address these challenges, the Department of Defense needs the help of world-class AI talent. And talent management will be one of the challenges that CDAO must tackle.

The Pentagon wants to leverage such expertise in industry and academia.

However, “we do need, you know, folks inside the system able to help us conceptualize and build out the kind of … AI enterprise that we need,” Hicks said. “I’m very hopeful that CDAO will be right up there with ideas of how we get better at both recruiting talent, but up-skilling and re-skilling and then retaining some of that talent.”

Digital experts need to be able to rotate in and out of government, she suggested.

The CDAO is also tasked with helping the Pentagon develop “responsible AI” systems that are effective on the battlefield but are also constrained by the ethical principles that the DOD applies to the technology. The Pentagon is currently rewriting its AI policy and rethinking its guidelines for autonomous weapon systems.

“We have been a leader in responsible AI, we have set this pace for allies and partners, and certainly for adversaries who have nothing like it. And I think we can be very effective in warfare, we can create an effective deterrent and [still] stick by our norms … That’s really important to me that we advance that through CDAO,” Hicks said. 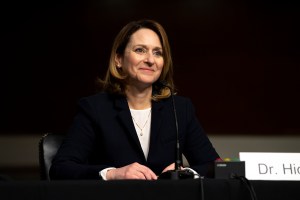