“Hogy” — as his friends and colleagues know him — applies his prior 20 years of active duty Navy service to this role at the company that specializes in providing RPA, data analytics, program management, and consulting offerings to a variety of government entities.

RPA broadly refers to the use of intelligent software bots that automate time-consuming manual processes, many of which are required to run the U.S. government.

Getting it right, with bots

Aeyon is the conglomeration of four existing companies that came together in recent years to collectively provide RPA and other digital transformation services they were each individually leading to support DOD and its military components, NASA, the Federal Aviation Administration and other federal teams.

Hogenmiller and his team aim to improve and automate their clients’ physical and digital processes to help them move faster — or, “as we like to say, ‘to innovate and accelerate,’” he said.

In a recent project for the Air Force, Aeyon has been automating processes to help the Air Force’s Freedom of Information Act Office respond to requests faster and more efficiently.

Officers involved in such work for the Air Force collect fees from their customers that they may not be eligible for if late for responses — so RPA “really helps them in getting that, cost recovery that they’re entitled to for doing the work,” Hogenmiller said.

In that FOIA-aligned RPA work, the agency is introducing automation to boost the routing of requests, and also bots that are further ensuring response accuracy.

“I know from my work in the Department of Defense — the worst thing that could happen is you inaccurately answer a FOIA request by either giving information that you shouldn’t have or not answering the correct question and it gets taken out of context,” the former Navy officer said.

For the Marine Corps, Aeyon is supplying automation supporting the transition of the service’s legacy financial management system to a modern one. Data migration processes are being automated, and accuracy is being applied to acquisition approaches in new ways.

One of the bots recently connected to that work and implemented for the force by Aeyon has already eliminated “about $15 million in reconciliation errors of somebody having to then spend time to go fix” data that was not properly documented in systems, Hogenmiller said.

“So, from that perspective, we look at the types of things that we’re doing there to really help make sure that that information is accurate — getting in the right place. And so again, we’re freeing them up to do other things, and using their domain expertise for the things that are most important,” he added.

Beyond a review of the force’s native applications to see where new processes can be integrated, officials here intend to review systems to see where financial information can be applied for budget monitoring, how schedule information can advance how the Army is meeting specific bureaucratic requirements, and more.

After two decades of Navy service, Hogenmiller went on to provide consulting to DOD for about 18 years.

“Having been out there and working to lead sailors and Marines out in the field — anything you can make the job more exciting and get out of the mundane tasks, I think — helps for morale perspective,” he told DefenseScoop. “So, as a leader, I really look at that as one of the [important] things, especially in this day and age where the workforce is tight, and we’re trying to retain people.”

Another major impact of RPA is reducing errors related to the fulfillment of government services and personnel processes.

“I always think back to my time, whereas the biggest thing that would affect my sailors is, ‘hey, they’re serving 3,000 miles away from home, and their pay is not correct” — ultimately leading to major, unnecessary strains on military families, he noted.

This situation is similar to “when you’re deployed, and you’re wanting to make sure that your repair parts in your logistics supplies are getting to the right place at the right time, the first time. There may not be an opportunity to get rerouted from that perspective,” Hogenmiller added.

Many of Aeyon’s employees come from a similar mold “in that we have prior military experience and we still remember what it was like to serve out there and something was not correct,” the CTO said. So, he and his colleagues are therefore passionate about alleviating mundane military tasks with RPA, while also ensuring “things get done right the first time.”

For years now, the Pentagon has been pushing the narrative that artificial intelligence and augmented intelligence can accelerate military operations.

More recently though, Hogenmiller is observing how many officials are beginning to grasp that AI isn’t built to bolster all applications out there.

At conferences lately, he’s found that the commercial sector is also generally arriving at such notions.

Still, he acknowledged that bots can effectively serve most organizations as “a stepping stone for machine learning and some natural language processing,” at least in the near term.

“One of the things that we’re excited about with this kind of low-code, no-code approach is — I really believe that it is democratizes the domain expert,” Hogenmiller added.

Back when he was working with people engaging with datasets, he’d get intimidated when he’d have to ask certain officials for support because at times they’d have to learn entirely new and complex programming languages to achieve what he needed.

With “very simple” RPA tools “they can pick it up in the future as a low code, no code application — and then with those harder problems they can bring in a data scientist or programmer that needs to kind of do those [more sophisticated] AI algorithms,” Hogenmiller said. 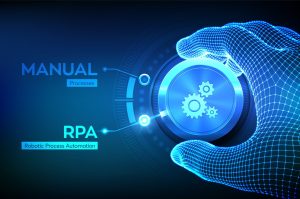 For the military, software bots are simplifying FOIA, financial and other manual processes