The U.S. Transportation Command plans to migrate its cloud applications to the Air Force‘s Cloud One platform offering over the next two years.

Senior IT acquisition officials told participants during a virtual industry day Wednesday they have met with the Cloud One team to kick-off the partnership, focused for now on a handful of pilots to migrate USTRANSCOM’s transportation modeling and simulation tool and both classified and unclassified versions of its Global Transportation Planning systems to the cloud.

Based on the progress made through the remainder of fiscal 2022 with those first pilots, the command will look to move more of its programs of record to Cloud One’s services in fiscal 2023.

The agency planned to move its cloud capabilities, currently hosted in Amazon Web Service’s GovCloud, to the Department of Defense’s now-defunct Joint Enterprise Defense Infrastructure (JEDI) cloud platform. But with JEDI’s cancellation, USTRANSCOM had to find a new option.

“Like many organizations, we were projected to transition to what was once known as JEDI,” said Scott Borchers, chief of the DevOps & Pipeline Division in USTRANSCOM’s J6 office. “And when the JEDI contract was ultimately canceled, we made a decision to transition to other DoD approved enterprise cloud contracts and services.”

Other options on the table were the Defense Enterprise Office Solution (DEOS), which USTRANSCOM does use for collaboration tools, and the Defense Information Systems Agency’s milCloud 2.0, which DISA announced recently would sunset later this year.

Borchers said the plan is to leverage the Air Force’s Cloud One for infrastructure-as-a-service — offering both AWS, Google Cloud Platform and Microsoft Azure options — and then use the branch’s Platform One capability as well, “with the intent to speed capability to delivery” for software development.

Jim Lovell, a program executive officer supporting the cloud migration, said in migrating to the Air Force’s existing offerings, it will fast track USTRANSCOM’s adoption of DevSecOps and automated authority to operate (ATO) capabilities, as well as “a lot of the more progressive cloud features that you would expect from a world-class cloud hosting environment.”

At this point, Lovell said, “all indications are we’ll be done with the first three [pilots] in this fiscal year.” And over the next “30 to 45 days,” the command will be finalizing contract actions to make the move. 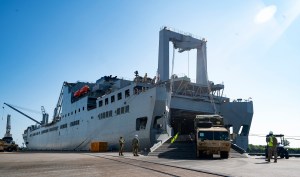