The Department of Defense wants to create regional innovation hubs that it hopes will kickstart the domestic development of microelectronics.

The department’s Office of the Undersecretary of Defense for Research and Engineering, led by Heidi Shyu, issued a request for information Thursday seeking feedback from the domestic microelectronic community on building what it’s calling a Microelectronics Commons.

The U.S. has historically led the global development of microelectronics — circuits, chips and other small-scale electronic materials. The DOD’s development and adoption of advanced technologies and weapons systems is highly dependent on the continued development of such computer chips. But, in recent years, the DOD says in its solicitation, “the efficient domestic adoption of U.S. chip innovation has been threatened as emerging hardware technologies have become increasingly reliant on offshore sources for State of the Art (SOTA) manufacturing, prototyping, and investment.”

“There are several significant hurdles that hardware startups face, including limited or expensive access to necessary facilities and design infrastructure, high costs of design intellectual property, limited expertise with hardware engineering, and high costs of prototyping,” the RFI says. “As a result, the number of U.S. hardware startups has dropped significantly and foreign investment in U.S.-based technology startups has enabled offshore fabrication and maturation of emerging technologies.”

The DOD envisions the commons to be “a public-private partnership consisting of regional innovation hubs distributed across the U.S. to foster a pipeline of innovative ideas and talent residing in university labs and small business R&D teams,” per the RFI.

“Microelectronics are vital to every aspect of our lives from delivering power to our homes to securing our nation’s infrastructure,” Heidi Shyu, DOD’s CTO, said in a statement. “They also support nearly all DoD activities, enabling capabilities such as GPS, radar, and command, control, and communication systems.”

The idea behind the commons is to reduce barriers to innovation and enhance infrastructure, namely by establishing “Lab-to-Fab” testing/prototyping hubs, providing broad access to those hubs for developers and spurring a stronger education pipeline around microelectronics at local colleges and universities. The hubs will “focus on critical, on-shore prototyping to transition innovation from universities, start-ups, and small companies to manufacturing.”

The RFI goes into great detail on the envisioned organizational layout of the commons and how it will be managed, asking respondents for feedback on the proposal and its operations.

Shyu has been championing her priorities for elevating DOD’s technology advantage of late. Earlier this month she issued a memo on those priorities, which lists microelectronics as a “critical technology area,” writing that “[t]o maintain the United States military’s technological advantage, the Department will champion research, science, technology, engineering, and innovation.”

A semiconductor shortage, exacerbated by the supply chain disruptions of COVID-19, has impacted sectors across the American economy, leading the White House to take action to work with producers “to ramp up domestic manufacturing for critical goods like semiconductors, tackle near-term supply chain bottlenecks, revitalize our manufacturing base, and create good jobs here at home,” according to a release.

Congress has also passed bills in both chambers that would issue private-sector investments to bolster chip development domestically. 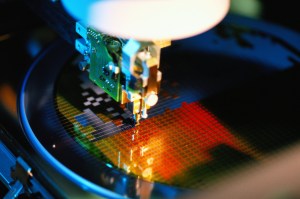