The Air Force has awarded Raytheon Missiles and Defense a $985 million contract to develop an air-launched Hypersonic Attack Cruise Missile as the service pursues more high-tech weapons to compete with adversaries such as China.

Raytheon beat out Lockheed Martin and Boeing for the down-select for the HACM program. The companies had each done preliminary design work before the contract award to Raytheon was announced Thursday.

“The task order provides for the HACM weapon system design, development and initial delivery through the performance of model-based critical design review, qualification, integration, manufacturing and testing. Work will be performed in Tucson, Arizona, and is expected to be completed by March 2027. This award is the result of a limited sources competition with three sources. Fiscal 2022 research and development funds in the amount of $100,000,000 are being obligated at the time of award,” the Defense Department said in the contract award announcement.

The Air Force requested $317 million for the HACM program in fiscal 2023, and it plans to spend more than $1.2 billion on the effort over the next five years.

In fiscal 2023, the “effort will utilize a single industry performer to build upon preliminary design activities and mature HACM to critical design,” according to budget documents.

The program will prioritize system integration on the F-15E fighter aircraft to enable “quick entry into flight test,” according to budget documents.

Hypersonic weapons are expected to travel faster than Mach 5, be highly maneuverable against enemy air defenses, and be able to attack time sensitive targets.

Hypersonic cruise missiles use air-breathing scramjet engines for propulsion, whereas the hypersonic boost-glide systems that the Pentagon is also working on use rocket boosters to reach extremely high speeds.

Raytheon has already been teaming with Northrop Grumman on air-breathing scramjet systems for DARPA’s HAWC program. That technology could transition into the HACM program, Chris Haynes, Northrop Grumman’s senior director for strategy and business development, said during a media briefing on Monday at the Air Force Association’s Air, Space and Cyber conference.

However, the price tag for the weapons once they go into production will determine how many the department will be able to procure, he noted.

“What the hypersonics community is trying to do is shoot towards an all-up round cost that’s reasonable,” he said. “We’re not going to be able to buy very many of them if they’re $80 million all-up rounds. So they’re shooting for somewhere even as low as 10 or 5 million [dollars] a round. And that really is going to drive the numbers.” 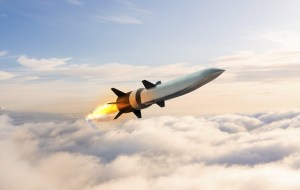