Kelly serves as the commander of the Air Force’s Air Combat Command (ACC), which is the primary force provider of combat airpower, and he oversees the operation of more than 1,000 aircraft. Next Generation Air Dominance (NGAD) refers to the Air Force’s complex, envisioned sixth-gen fighter initiative. It essentially encompasses what Pentagon officials refer to as a “family of systems,” including a human-operated aircraft with drones and unmanned platforms supporting it.

“I cannot tell you today what’s going on in China except that they’re planning for their 20th National Party Congress. But I can tell you what’s not happening: They’re not having a debate over the relevance of sixth-gen air dominance,” Kelly told reporters during a media roundtable at the Air and Space Forces Association’s annual Air, Space and Cyber conference.

“And I can also tell you they’re on plan,” the four-star general added.

From his purview as a commander and command pilot, Kelly compared the U.S. and China’s approaches to this aim.

While America’s military tends to “let go with a trapeze and kind of make a leap for the next run” when deploying new technology-driven aircraft and weapons, “the Chinese frenemies” typically opt to iterate — “5.1, 5.2, 5.3 — they tend to iterate what they have, and morph and evolve,” he noted.

For its fourth-generation aircraft fleet, China started with the Su-27 air fighter early on and “morphed” it into the Su-30 and so on, according to Kelly. The way the nation is building the technology and the industrial base “makes it a little bit easier for them to grab the wrung when they go up to fifth-gen” compared to how the U.S. has, he said. After that, he expects the Chinese will continue to iteratively innovate their avionics up to the sixth-gen threshold.

“We need to get there before they do, [or] it won’t end well,” Kelly said.

The Air Force intends to provide operational capability of its NGAD program with systems online by 2030, but there is still a lot to be decided and produced for that to actually happen.

In Kelly’s view, the most pressing technological hurdles to reaching that next level of air dominance involve software and integration. While the Lockheed Martin-made F-35 combat aircraft, equipped with an advanced sensor suite, has hardware “that works phenomenally well,” the general noted, the software has been an impediment.

“We have been challenged through the growth of the airplane mostly in the software realm,” with issues around data mission files, simulation and more, Kelly added.

“There’s more countries on the globe that can build a nuclear weapon than can build a fifth-generation aircraft. It’s just hard stuff — and the hardest of the hard stuff is coding a core processor to an integrated core process,” he told DefenseScoop during the roundtable.

Gen. Kelly is pushing for the U.S. to take a more iterative approach going forward to ensure the most sophisticated capabilities in the pipeline are operational in quicker periods of time, particularly as this high-stakes pursuit unfolds.

Although there are nuances, Kelly believes that China and the U.S. by-and-large view sixth-gen air dominance “in terms of an exponential reduction in signature,” and an “exponential acceleration” in processing power and sensing. They also both see its potential to enable military officials to program at the speed of relevance.

“I think [the Chinese] see it pretty much the same way. I essentially cyber-stalk the folks that do the design over there in the different bureaus, because I have no life. And they’re not dummies — not at all,” the commander said. “They know what they’re doing.” 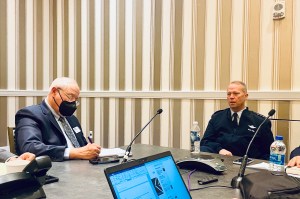