U.S. Central Command will soon be putting new soldier-developed counter-drone training software through its paces at the Red Sands experimentation venue in the Middle East, according to its chief technology officer.

Planning for the event, which is slated for next year, comes as the U.S. military faces a growing threat from unmanned aerial systems.

Red Sands is “a program that will be shifting experimentation related to counter-UAS throughout the region so that everybody can benefit from it,” Centcom’s Chief Technology Officer Schuyler Moore told reporters during a briefing at the Pentagon on Wednesday.

The yet-to-be-named “platform agnostic” counter-UAS training tool that will be part of the experimentation was developed by Army Sgt. Mickey Reeve, the winner of the command’s inaugural Innovation Oasis competition — a Shark Tank-like event where servicemembers and Defense Department civilians are given the opportunity to bring forth their inventions that the U.S. military could potentially adopt.

Reeve developed the training software while he was deployed to Saudi Arabia on a counter-UAS team.

“I noticed that there was a way to bridge many of our multiple proprietary, independent counter-UAS systems that form our layered defense together to provide a common operating picture for training. And with this, what I was able to do is I was able to build a sandbox tool for operators and teams to train against any scenario, any UAS threat, in any environment — and really to push the envelope of what our training is able to provide to our operators to really get those good, consistent, quality repetitions in,” Reeve told reporters during the briefing.

“This is a tool that I built out to be completely agnostic to any sort of counter-UAS system, so that … [it] can be used with current and future systems,” he explained. “What this tool is intended to do is to provide the opportunity for the boots on the ground that are closest to the threat and closest to their operational environment to mimic that environment as accurately as possible, and to as well deploy threats against their base and to train against threats on their base that they see and that they interact with, sometimes daily.”

Task Force 39 — which has been stood up inside Centcom to advance technology experimentation — and the Army Software Factory in Austin, Texas, are working to build out an initial “minimum viable product” for Reeve’s invention, Moore said.

While the tech will be tested out in the Centcom region, it could potentially be adopted by other geographic combatant commands or Defense Department components.

“The problems we face here, especially force protection, are not Centcom specific. This is stuff that everyone across the department faces. And so if we can create a solution that multiple people can leverage, we want to make sure that we’re doing that,” she said.

The Innovation Oasis contest wrapped up in October. The goal is to have a “fully fleshed out product” within 90 days, which would make it ready for the Red Sands experimentation, according to Moore.

“The timing to us was perfect, because … this tool, a trainer, is something that not only we can use, but our partners can use. It’s going to be accessible on all of the networks where folks can,” Moore said. “And so it’s a perfect starting point to say, ‘OK, are we all thinking about this in the same way? Are the factors that you can cue on this trainer meeting everybody’s collective needs for it? So it’s certainly a great starting point, and there will be a broader set of counter-UAS efforts inside of the Red Sands program.” 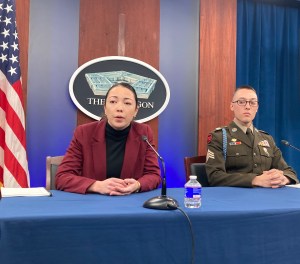