The IDIQ contracts, collectively worth up to $4.1 billion, are for CANES production units, software – initial, renewals and maintenance, spares and system components, and lab equipment, according to a Defense Department announcement on Dec. 16.

“CANES is the Navy’s program of record that consolidates and replaces existing afloat networks providing the necessary infrastructure for applications, systems and services required to dominate the cyber warfare tactical domain. CANES represents a key aspect of the Navy’s modernization planning by upgrading cybersecurity, command and control, communications and intelligence systems afloat, and by replacing unaffordable and obsolete networks,” according to the notice.

The Navy had issued a solicitation for the program in February and received 10 offers.

The awards came as the Navy works to adopt new networking technologies and improve its ability to counter cyber threats.

The service’s platforms and other capabilities must be linked through a vast network of advanced communication technologies, Navy Secretary Carlos Del Toro noted during the AFCEA NOVA Naval IT conference in October.

“Building upon these critical advantages takes investment and planning. That’s why we’re investing in the information architecture, cybersecurity and technical resilience that underpins our distributed power,” he said, including by hardening networks and computing systems.

According to the CANES contract award announcement, the primary goals of the program are to provide a secure afloat network required for Naval and joint operations; consolidate and reduce the number of afloat networks through the use of Common Computing Environment and mature cross-domain technologies; reduce the infrastructure footprint and associated logistics, sustainment and training costs; and increase reliability, security, interoperability and application hosting to meet current and projected warfighter requirements.

The IDIQ contracts have a 10-year ordering period up to the contract award amount, and work is expected to be completed by December 2032.

“Contract actions will be issued and funds obligated as individual delivery orders. Other procurement (Navy) funds will be placed on contract with an initial delivery order issued to each contractor on record at the time of award,” according to the announcement. 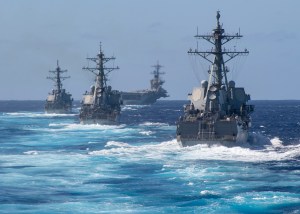