Charneta Samms, a 25-year employee of the command known as DEVCOM, was most recently the chief of plans and programs at the Army Research Lab. Her new role will be all about “connecting smart people,” she told FedScoop. Unlike other CTO offices, that are often housed within CIO shops or focus on creating tech, Samms will develop strategies and implementation plans for the Army’s modernization initiatives.

“I am focusing on the big picture,” said Samms, who took up the job in September last year.

Samms is a trained engineer and specialized in human performance modeling, according to a release about her new position. DEVCOM is a major component of the Army’s new modernization-focused Futures Command.

One of her top priorities is ensuring DEVCOM has the right demand signals when it decides what research to prioritize.

With such a large organization, there often is not enough resources to pour into every area of interest. Samms says her job is to ensure the Army can work with partners, like industry and academia and allied militaries, to ensure resources are spent wisely.

“The challenge becomes who are the right people,” she said.

Samms has also served in various leadership positions of the National Society of Black Engineers and won several internal and external awards for her work.

“We’re breaking down barriers and bringing a perspective that is unique,” Samms said. “If you think about diversity of thought and women working on modernization from their perspective and experience, you’re going to get a whole new generation of amazing ideas and technologies that we can develop.” 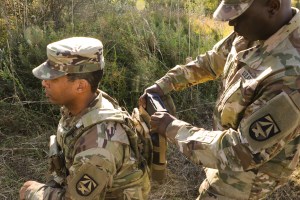