The Navy is developing technology including lasers in middle eastern waters to counter threats to unmanned systems from hostile countries, the top naval officer in the region said Friday.

Vice Adm. Brad Cooper, commander of the Navy’s Fifth Fleet which operates in the Middle East, said that the threat from drones has dramatically increased in recent years especially from countries like Iran. The challenge has recently been compounded by emerging capabilities to network drones with artificial intelligence to form “swarms” that could create synchronized attacks.

Cooper described a “dramatic up tick in [unmanned aerial vehicle] activity, both in terms of profile and density of activity.”

Directed energy weapons have recently been tested in the region as means to disarm incoming threats. It’s tech that the U.S. Navy has been working on with Israel, Cooper said during a talk at the Center for Strategic and International Studies.

The fleet is also working on building unmanned systems of its own for deterrence and detection of drones, both in the air and now on the surface of the water. A recent “saildrone” was launched by Task Force 59, which is the Fifth Fleet’s task force that focuses on unmanned systems. The vessel was launched in partnership with the Jordanian military and has an AI system on board that can control the drone’s movement and collect data on its surroundings.

Cooper described innovation and delivering new unmanned systems to the waters off the coast of the Middle East as one of the key aspects of the deterrence posture he is working to deliver. A key part of that is Task Force 59, which was launched in September and already has key partnerships with Bahrain and Jordan’s military, Cooper said. The fleet also has contractors working to deliver new tech.

“Companies that produce drones are operating with us in a contractor-own, contractor-operated model,” he said.

Cooper said that with AI, the data captured by unmanned systems can be processed to detect moving objects at sea to increase visibility over the ocean. 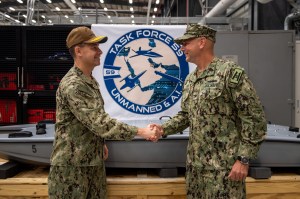