Shield AI, the defense-focused autonomous drone startup, won a possibly $60 million contact from the Air Force designed to keep cash flowing to companies while they await opportunities to get on major contracts.

The contract, awarded through the Strategic Funding Increase (STRATFI) Program, might be small compared to full production awards but can be issued much faster than the two-year budgeting cycle allows for programs of record. Shield will be providing its AI tech stack and unmanned systems to the Air Force Special Operations Command, the company announced Thursday.

STRATFI was created to keep innovative start ups earning while they wade through the DOD’s acquisition cycles. The phenomenon is known as the “valley of death” and has been one of the main hurdles for tech startups looking to sell to the military. Companies that show promise of being able to make it on a program of record can earn up to $60 million over three years under a structure that gives $15 million the first two years and $30 the third.

“We’re fired up – this program is centerline with our mission to advance U.S. core values by providing DoD with leading technology,” Brandon Tseng, Shield AI cofounder and former Navy SEAL, said in a press release.

The program also requires companies have additional investment, either through other government funds or private capital, according to the program. Shield has attracted money from venture firms including Breyer Capital and Andreessen Horowitz. The company has also worked on partnering with established defense contractors as a means to break into the DOD market.

The company says its tech stack, called Hivemind, can direct swarms of small drones and deliver “full autonomy.” The company focuses on “AI for small unit maneuver,” a key priority for AFSOC. It’s tech so far has been developed for detecting enemies in a buildings without needing to send troops in harms way and it recently acquired Martin UAV which makes larger vertical lift systems.

“Human-machine teaming is a critical capability for AFSOC’s broader transformation for strategic competition,” Hoffman said in the release.

Beyond its own drone systems, the contract begins work on Shield integrating Hivemind into the Air Force’s flying car program called Agility Prime. 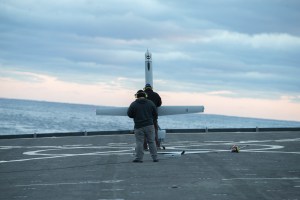