Katie Arrington has been on leave from the department since May, following allegations she disclosed classified information. In October she filed a lawsuit against the DOD and National Security Agency in response to the allegations relating to her suspension.

The lawsuit was settled in late January, and in her resignation letter Arrington wrote that the allegations were false and political motivated.

“The suspension of my clearance was, in my perception, a politically influenced action driven to silence me,” she wrote.

Before joining the department in 2019 Arrington ran for Congress to represent South Carolina’s first congressional district in 2018, winning the Republican primary but losing the general election. Before, she was a Republican member of the South Carolina State Legislature.

Arrington came to DOD as a “Highly Qualified Expert,” later earning the same title of chief information security officer of acquisition and sustinament as a member of the senior executive service. The CISO position she held was eliminated prior to her Monday resignation.

Arrington won praise for her work promoting CMMC, the department’s program aimed at increasing the cybersecurity of defense contractors by verifying their compliance to a range of security controls. She used her political skills to stump for CMMC, making cross-country trips and appearing weekly on zoom calls to speak in support of the program.

Some key members of the CMMC ecosystem bristled with her style and found her experience on cybersecurity policy lacking, a tension that at times strained her relationship with the CMMC-Accreditation Body that she helped create. After her suspension the department announced a significant reduction in the scope of CMMC and the program she built.

In her resignation she stated she had intended to file a hostile work environment claim against Deputy Assistant Secretary of Defense for Industrial Policy Jesse Salazar prior to her suspension.

The DOD and NSA declined to comment on her resignation. 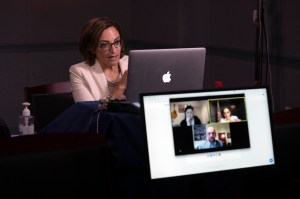