Maj. Gen. Matt Easley has stepped down from his role as director of cybersecurity and chief information security officer for the Army.

Easley has taken a role as the deputy principal information operations adviser to the secretary of Defense within the office of the undersecretary for policy.

Easley served as the Army’s director of cybersecurity since August 2020, shortly after the service’s Office of the CIO was restructured. Before that, he was director of the Army’s Artificial Intelligence Task Force for roughly two years.

In a LinkedIn post, Army CIO Raj Iyer wrote of his departed colleague: “A bittersweet moment for us in the Army Chief Information Officer family as we bid farewell to Major General Matt Easley, our first Chief Cybersecurity Officer in the new OCIO. Matt has set us up on an awesome path to zero trust for both IT and Operational Technology. The Army’s FISMA scorecard under his leadership is the best across the entire DoD. Thank you Matt for everything you have done for us and best wishes on a very critical role in the DoD moving forward.”

Easley was recognized last fall as one of the 2021 CyberScoop 50 in the government category. 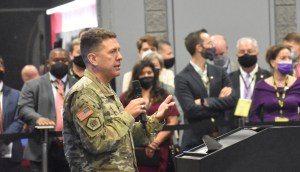 Army CISO Easley departs for role at the Pentagon