The Marine Corps has established a new occupation field for its personnel specifically for information warfare, signaling the importance the larger information space will play in future conflict.

The Corps redesignated its 17XX career field from cyberspace operations to information maneuver, it announced in a press release Tuesday.

The 17XX career field was established in 2018 as a means of better managing cyber operators. Officials equated it to special operations forces in which they are trained and don’t depart that role for the duration of their careers.

In recent years, the Corps, along with other components of the Department of Defense in one way or another, have begun to reorganize under the banner of information warfare, consolidating like capabilities to include cyber, electronic warfare, information operations, intelligence, space and others.

U.S. adversaries and competitors, such as Russia and China, are also restructuring their military forces around the concept of information, an approach that views cyber, space, electronic warfare and information operations as one discipline, not separate and siloed domains.

The Corps’ new career field includes specialties such as space, electromagnetic spectrum operations, cyber warfare, civil affairs and psychological ops. Such capabilities be employed in a conflict or in the gray zone, a term which refers to competition below the threshold of war.

“Prior to the established of the Information Maneuver OCCFLD, Marines gained valuable experience and skills at a Marine Expeditionary Force (MEF) Information Group (MIG) or at combatant commands only to go back to their previous [military occupational speciality] causing us to repeat the cycle again, never getting Marines with more than three years of experience across information related billets,” said Col. Jordan Walzer, director of the Information Maneuver Division within the office of the deputy commandant for information.

The MIGs were created in 2017 as a means of modernizing the Corps and keeping pace with adversaries who exploit the information environment via cyberattacks, propaganda and electronic warfare. They include tactical cyber operators to conduct defensive cyber ops, electronic warfare, signals intelligence and other information-related activities.

In 2017, the Corps dedicated a three-star billet to create the deputy commandant for information, which oversees all aspects of information warfare within the service.

Given how small the Corps is, dedicating a three-star billet to information, which means sacrificing another three-star position elsewhere, is a big deal.

“Two years ago … [former commandant] Gen. [Robert] Neller talked with us about the need to move into the information environment, electronic warfare, MISO [military information support operations], cyber and military deception faster. He traded — intentional, deliberately traded — a three-star billet from a command and created a three star [DC-I] … who oversees that for us,” Marine Corps Commandant Gen. David Berger told Congress in 2020 about the importance of the position. “You wish you could go back two years and thank him for that.” 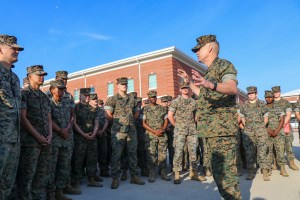