Members of the House Armed Services Committee want the Army to explore the idea of conducting a new pilot program focused on battery-powered tactical vehicles.

Lawmakers on the HASC tactical air and land forces subcommittee will include such a directive in their mark of the fiscal 2023 National Defense Authorization Act, which will be released this week.

“There is a direct report language in the subcommittee mark that deals with tactical vehicle electrification and asks the Army to look at the advisability and feasibility and estimated cost of doing an electric tactical vehicle electrification experiment or pilot through a CRADA cooperative research and development agreement with industry to kind of play around with the idea of tactical vehicles operating away from, you know, charging stations around the corner — that kind of thing,” a committee aide told reporters Monday during a background briefing on the legislation.

The information from the briefing was embargoed until Wednesday morning.

“There’s a lot to learn and … many members of the committee are very interested in the potential for electrification and are looking for ways to perhaps accelerate the promise of electrification,” the aide said, noting that “the real challenge is tactical applications.”

Officials in the Biden administration, including Deputy Secretary of Defense Kathleen Hicks, are keen on the U.S. military moving toward electric vehicles. They have touted it as a way to combat climate change and achieve operational benefits in the form of reduced logistical and maintenance requirements, and stealthier platforms that emit less noise and heat.

Contractors such as GM Defense are investing in EV technology with the hopes of selling it to the Pentagon.

Defense officials and other observers see the non-tactical vehicle fleet as “low-hanging fruit” when it comes to electrification. However, making the tactical fleet battery-powered is more complicated because the platforms must be able to operate in more austere environments.

In an Army commissioned study released last year, the National Academies of Sciences, Engineering and Medicine said all-electric tactical vehicles won’t be practical until 2035 at the earliest, largely due to shortcomings in battery technology and recharging capabilities on potential battlefields of the future.

Army Lt. Gen. Duane Gamble, then deputy chief of staff, G-4, told members of the HASC in December that in the near term the service will be more focused on hybrid-electric drive for combat vehicles because “full electrification for our complex weapon systems at the forward edge of the battlefield is a goal that we don’t believe that currently our technology will support.”

Gamble is now serving as special assistant to the staff director in the office of the chief of staff of the Army. 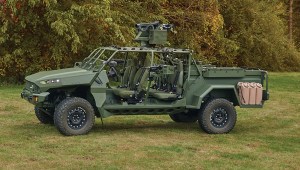