The House Armed Services Committee chairman’s mark of the fiscal 2023 National Defense Authorization Act, released Monday, includes a pilot program for the Pentagon to test the feasibility of new and unique approaches to negotiating and establishing software data rights in agreements for the procurement of software.

Data rights related to weapon systems and other military technologies have long been a point of contention between the Department of Defense and industry. The Pentagon seeks to avoid vendor lock and control costs, while contractors want to protect their intellectual property and maximize profits.

Software and technology are a big focus of HASC Chairman Rep. Adam Smith’s mark of the fiscal 2023 NDAA policy bill, committee staff told reporters last week during a briefing to preview the legislation before its public release.

“This requires the Department [of Defense] to launch a pilot program to test the feasibility of unique approaches to negotiating data rights to improve speed, efficiency and effectiveness of defense acquisitions,” said one staffer on condition of anonymity. “Data rights have obviously been a sticking point on a whole variety of acquisition programs over the years … so finding new [and] unique ways to get after that in the acquisition process is going to provide better results on the back end. That’s a lot of the thinking behind that.”

The staff did not provide additional details about the provision. Information from the briefing was embargoed until Monday.

The pilot program is to be established by the secretary of Defense “not later than 18 months after the establishment of this Act,” according to the text of the chairman’s mark.

The full committee markup of the NDAA, a far-reaching annual defense policy bill, is slated for Wednesday.

The Senate Armed Services Committee’s version of the NDAA, which was passed out of committee last week, would authorize $817.3 billion for the DOD and $29.7 billion for the DOE, for a total NDAA topline of $847 billion, according to a summary of the legislation.

The annual defense policy bill must go through a complex legislative process before it becomes law. The House and Senate must eventually reconcile their respective versions of the NDAA, and the two chambers must pass a compromise bill before it goes to the president’s desk.

It remains to be seen whether Smith’s software data rights pilot program provision will be included in the final version of the fiscal 2023 NDAA that is passed by Congress and signed by President Biden. 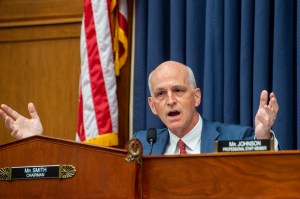