The Defense Department’s primary oversight arm is conducting market research to determine what exactly a move to the cloud would mean for — and bring to — its organization.

According to a two-page request for information (RFI) published this week, the DOD’s Office of the Inspector General is interested in commercial cloud solutions that could secure its particularly sensitive information and workloads, in an environment that’s isolated from the department’s various other cloud tenants.

Acting Principal Deputy Inspector General Steven Stebbins briefed FedScoop on the defense watchdog’s possible journey to the cloud and how the RFI should be viewed against the backdrop of the DOD’s ongoing Joint Warfighting Cloud Capability (JWCC) pursuit.

“Right now we haven’t made any major decision to move to the cloud. Our environment is currently housed in [Defense Information Systems Agency] data centers, but obviously, this is a fast-moving area. It’s evolving, and we want to have all the information that we need, so if we do decide to make a decision down the road — and potentially move to the cloud — we’re fully informed,” Stebbins explained.

The Army veteran, who also currently serves as the OIG’s chief of staff, noted that the office “is in a good place now” when it comes to its computing infrastructure, but needs to prepare for whatever the future might bring.

“So that’s really all that this [RFI] is about,” Stebbins said.

In order to host the Pentagon’s data, cloud service offerings must be compliant with a number of government regulations and categorized into one of several impact levels, which are based on the sensitivity of that data.

In the RFI, OIG officials note their intent to learn more about cloud solutions that are approved to house information at DOD impact level 5 (IL5) — or the most sensitive level of unclassified information — and connect to the Non-classified Internet Protocol Router Network (NIPRNet). They confirm in the document that “the OIG is anticipating to operate in a hybrid environment with a phased move of key applications to the cloud over time.”

Specifically, the office wants to hear from other federal entities that have transitioned to the cloud about cost savings and benefits they’ve realized in doing so. Other responders beyond the government are also invited to weigh in on how the technology could impact the IG.

Responses to this RFI are due by July 19.

As it’s only “just beginning to gather information,” Stebbins said the OIG does not currently have a timetable for next steps. Once insights are collected through the RFI, they’ll be shared with the Chief Information Office and other key technology players. And as with any RFI, there’s no obligation to move forward with a procurement.

“We don’t want to be reactive and find ourselves in a position where the department goes one direction and we have limited time to make a change to our current arrangements,” Stebbins said. “We want to anticipate that and then be prepared to make timely decisions.”

Notably, the OIG is pursuing this research as the broader DOD is preparing to award its highly anticipated multi-vendor cloud contract vehicle, JWCC. Google, Oracle, Microsoft and Amazon Web Services are currently competing for awards on that vehicle, which is worth billions and replaced the JEDI contract after the DOD’s original and years-long enterprise cloud competition was ultimately canceled.

“While we certainly are aware of what the department is doing, our requirements are our requirements — and I don’t know that what we’re doing here really is part of that conversation, at least at this point,” Stebbins said.

If the OIG does move forward with implementing its own cloud before JWCC comes to full fruition, it’s unclear right now whether it will consider other cloud vendors beyond those four competing for the bigger DOD contract mechanism.

“I really can’t say at this point. We’re gathering information. We’ll see what happens in the future,” Stebbins said. “So, we’re open to whatever options might be.” 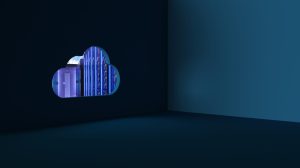 Pentagon’s IG contemplates move to the cloud via new solicitation