With the final stage set for the Army to choose one of two contractors for its next-generation ground system to collect and disseminate sensor data, both companies are trying to develop a system that will be adaptable in a highly dynamic and unpredictable multi-domain environment of the future.

The Tactical Intelligence Targeting Access Node (TITAN) is considered a critical modernization component for the Army’s multi-domain operations (MDO) concept because it will integrate various types of data from numerous platforms to help commanders make sense of a fast-moving and complex battlefield. The Army recently awarded Raytheon Technologies and Palantir $36 million each to compete for the final phase of the contract, at which point there will be a downselect to one company.

There will be four opportunities for the companies to present their capabilities to soldiers during that 14-month process, company officials said, with troops providing critical feedback to further build upon.

“What’s different this time is that the Army is very engaged in a sense that from a teaming perspective, which is great, that when we go through these review demos every quarter that we’re going in together on this. And it’s more about developing and improving,” Scott McGleish, Raytheon Intelligence and Space’s lead on TITAN, told FedScoop in an interview. “I think you have to have that operational view as well … It’s very good the way it’s being done this way. We’re really happy with how the Army’s agreed to and moving forward.”

A senior engineer with Palantir, who was not authorized to speak on the record, indicated similar sentiments, noting the input from soldiers will help provide the Army something that will be ready to go for low-rate production and quick fielding at the end of the 14-month period.

To date, these soldier touchpoints have been both in lab-based environments — where the soldiers can see the laptops, interfaces and feeds — and exercises where they have the opportunity to validate the technology in an operational context.

In this final phase, McGleish said Raytheon will be working to mature the user interface, which ingests data and intelligence from various sensors across the Army and Department of Defense.

Palantir wants its system to be as modular as possible so the capability can evolve.

“We’re trying to make it as modular of an approach as possible and also to make sure that the system and the platform overall can mature alongside with the Army as advances in AI occur,” the engineer said. “It’s going to be very different considering what the fight might be in 2028 and what the current state of technology might be in 2028 or 2030, when the Army hopes to be MDO capable or MDO ready. We want to make sure that we’re going to be building this modularly as we go along.”

The next phase will also focus on further ingraining artificial intelligence and machine learning. This will help narrow down the right feeds of data from various systems and sensors at the right time for the processing, exploitation and dissemination of intelligence.

“You’re talking about, like six or seven ELINT [electronic intelligence], GEOINT [geospatial intelligence], SIGINT [signals intelligence], etc., and coming from space down to ground. All that — those feeds coming in and all the all the data that comes in on those — are labeled differently,” McGleish said. “The artificial intelligence and machine learning is going to help narrow that down, process it better so you don’t need an army of intel analysts. You need a few intel analysts in there. So this is what this is about. It speeds up the OODA [decision-making] loop and so the commander can make a decision to put some kind of effect” on targets.

Both Raytheon and Palantir officials explained the need to have open systems and work with others to ingest that data given the Army doesn’t own it.

“The Army again, has done a great job of communicating the overall concept of operations with our mission partners, then also supporting the technical exchange meetings or the TEMs with the partners as well too, so that they can keep tabs on the development of our program as it moves along,” the Palantir engineer said.

“You got to think about the peer-to-peer threats and the thousands of targets you’re going to have to deal with,” he said. 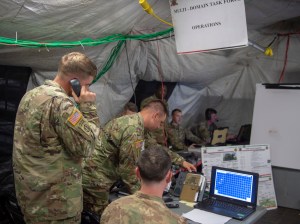