After a roughly five-year period following an award, a protest and an ensuing court battle, the Navy is reopening bids for a critical jamming program.

In June, the Navy along with L3Harris and Northrop Grumman agreed to a negotiated settlement to reopen discussions for the Next Generation Jammer Low Band program, according to a Navy spokesperson.

The Next Generation Jammer will serve as the Navy’s premier aerial electronic attack platform mounted aboard EA-18 Growler aircraft and will replace the ALQ-99 jamming pod. It has been broken into three pods covering three portions of the electromagnetic spectrum: mid, low and high.

Raytheon was awarded the mid-band pod in 2016.

L3Harris was awarded a $496 million contract for the low band jammer program in December 2020 after a broad agency announcement was issued in 2017. However, Northrop Grumman protested the award, alleging the Navy failed to consider the impact of a potential conflict of interest involving a Navy employee that developed specifications for the low-band system while simultaneously negotiating for employment with L3Harris during the solicitation.

The Navy initially decided to undertake a dual-track process in determining the award for the program, issuing Northrop and L3 at the time (prior to L3’s merger with Harris Corp.) an opportunity to demonstrate existing technologies in 2018 to help inform the Navy on how to mature the program.

During the demonstration of existing technologies, Harris was a partner on the Northrop team, though officials noted there was a firewall between that team and the L3 team when the two companies eventually merged in 2019.

The Government Accountability Office agreed with Northrop’s protest that there was the appearance of an unfair competitive advantage in favor of L3Harris. The GAO also said the Navy must engage individuals with the requisite technical expertise to conduct an independent review of the individual in question’s input during the relevant period of conflict to determine if their input was consistent with the Navy’s actual requirements.

A stop work order was issued, preventing L3Harris from working on the program.

L3Harris filed suit in the Court of Federal Claims on Sept. 7 disputing the protest.

The three parties have now agreed to a settlement that was accepted by the Court of Federal Claims, which details a path for reopening discussions with both vendors, a re-evaluation of their proposals and ultimately a re-award for the low band engineering and manufacturing development contract, the spokesperson said.

A contract award is expected in the first few months of calendar year 2023.

Following this agreement and the decision by the Court of Federal Claims, L3Harris said it will continue to support the Navy to bring this capability to the fleet, adding that it “remains confident in the technical superiority of our solution and look forward to being re-awarded this important contract.”

Northrop, for its part, said it “remains ready to provide the Navy with a low risk, mission-ready, speed to fleet solution to meet its Next Generation Jammer Low Band requirements.” 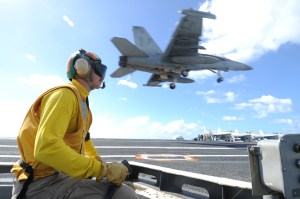