President Biden has nominated Lt. Gen. B. Chance Saltzman to be the next chief of space operations, the Pentagon announced Thursday.

If confirmed by the Senate, he would become a member of the Joint Chiefs of Staff and the Space Force’s top officer as the service tackles major challenges such as defending U.S. space assets against threats posed by advanced adversaries; acquiring new communications, intelligence, surveillance and reconnaissance capabilities; and pursuing the Pentagon’s Joint All-Domain Command and Control (JADC2) concept.

Saltzman is currently serving as the deputy chief of space operations for operations, cyber and nuclear. where he oversees operations, intelligence, sustainment, cyber, and nuclear issues for the Space Force.

If confirmed by the Senate, he would become just the second-ever chief of space operations, succeeding Gen. John “Jay” Raymond, who became the first person to hold the position after the Space Force was established as a separate branch of the military in 2019.

His confirmation hearing has not yet been scheduled. 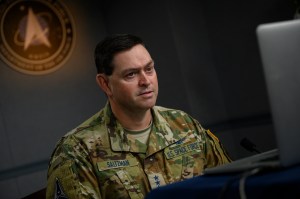