The Johns Hopkins University Applied Physics Laboratory has been awarded a contract for research, development, test and evaluation of military-related technology that could be worth up to $10.6 billion, the Defense Department announced Monday.

The lab, based in Laurel, Maryland, was awarded a $4.4 billion cost-plus-fixed-fee, indefinite-delivery/indefinite-quantity contract for RDT&E programs throughout the DOD that fall “within its core competency areas including strategic systems test and evaluation; submarine security and survivability; space science and engineering; combat systems and guided missiles; air and missile defense and power projection; information technology, simulation, modeling, and operations analysis; and mission related research, development, test and evaluation,” according to the DOD contract award announcement.

However, if all options are exercised, the cumulative value of the IDIQ contract would be $10.6 billion, according to the department.

Under the terms of the deal, the RDT&E work is to be performed in Laurel, Maryland, and is slated to be completed by August 2027 under the contract’s base award. However, if all options are exercised, it will continue through August 2032.

“The contract was not competitively procured in accordance with 10 U.S. Code 2304(c)(3)(B), as implemented in Defense Federal Acquisition Regulation 6.302-3 — industrial mobilization; engineering, developmental, or research capability; or expert services,” the announcement said.

Naval Sea Systems Command is the contracting activity for the award.

The JHU Applied Physics Lab has a long history of working on high-tech initiatives for the Pentagon. The department has also held events there to bring together other members of the military innovation ecosystem.

Last month, the DOD held a Rapid Defense Experimentation Reserve (RDER) industry day at the lab, which drew more than 470 attendees and over 190 private sector companies including small technology firms and major defense partners, according to a Pentagon press release issued Monday.

“The Industry Engagement Day was a tremendous success in support of the Deputy Secretary of Defense’s initiative to instill a multi-component campaign of learning through rapid experimentation of mission relevant capabilities,” Bruce Juselis, division chief for RDER technical accession and proposal development, said in a statement. “RDER is part of a Defense-wide effort to engage our innovative industry partners to rapidly develop and field capabilities needed to build an enduring advantage, and support campaigning as well as the Joint fight.” 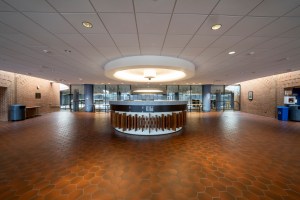 Johns Hopkins Applied Physics Lab lands Pentagon RDT&E contract worth up to $10.6B