ABERDEEN PROVING GROUND, Md. — The Army is looking at the potential for air- or even ground-launched electronic warfare platforms as part of a new modernized architecture to stay ahead of adversaries.

So-called Air Launched Effects (ALE) are essentially small drones or payloads released in midair by larger aircraft, either manned or unmanned. These smaller systems could consist of a variety of payloads and could loiter over a target being either recoverable or expendable. This has been an ongoing effort for the Army’s EW community in tandem with the Future Vertical Lift cross-functional team for some time with experiments taking place at a variety of exercises.

Work with the electronic warfare community and the aviation community on this integration is currently “preliminary.”

“We have some what we call tech maturity investments happening next year in ALE and we’re going to share it … They’re going to do the vehicle piece and we’re going to do some electronic warfare prototyping,” Mark Kitz, program executive officer for Intelligence, Electronic Warfare and Sensors, told reporters during a trip to Aberdeen Proving Ground on Aug. 30.

“I think as we go through that prototyping, we’re going to determine how that will work. If we’re just going to buy commercial technologies to integrate, I think aviation can probably handle all of that. If we’re going to do some unique things or some exquisite target or exquisite EW things then we’ll do it as a partnership,” he added.

Less mature is the ground-launched effects (GLE) concept. In fact, there is not even a requirement for it yet.

“We’re just looking at doing some prototyping to figure out okay, what types of effects, what types of collection … what could we actually deliver? These are the types of things that we’re asking industry what can you do, what are the capabilities you can deliver?” Kitz said, acknowledging there hasn’t even been an industry day for ground-launched effects yet.

This would be something the Army is looking at for the 2025-2026 timeframe.

While the Army is still working through the concept, Kitz said it is entirely possible it could be in place of an unmanned system that can loiter at a low altitude so a solider wouldn’t have to carry a dismounted system.

“I haven’t even had an industry day with industry on GLE. It’s really hey, we’re indicating to industry this is where we want to go and what are some of the things that they can do,” he said. “I think that industry partner would say, ‘here’s an obvious place to start.’”

These ideas are part of a larger battlefield architecture for electronic warfare. Since the Army divested much of its advanced EW gear after the Cold War, it is now working to rebuild its arsenal to defeat advanced systems and tactics of top competitor nations.

“What the Army is asking our electronic warfare [community] is how do you deliver an integrated architecture that will help me operate in the air and on the ground, and how can electronic warfare enable some of those future operations, whether that’s a [Future Attack Reconnaissance Aircraft] … whether that’s an [Optionally Manned Fighting Vehicle] or whether that’s long range precision targeting in terms of our range sensing,” Kitz said. “All of that integrated architectures is what we’re attempting to deliver.”

As the Army is looking to deliver air-launched — and potentially ground launched — payloads as part of that architecture, officials stressed that they likely won’t procure thousands of systems. Rather, they’ll procure a small amount that will be adaptable and tailorable through rapid software upgrades.

“I don’t think we’re going to ever be in a situation where we’re going to buy a thousand ALEs, because the threat is going to continue to change,” Kitz said. “That’s one of the things I think we’re really learning in the Ukraine is even six months ago, the environment looked very different than it looks now. We have got to be able to have systems or capabilities that can adapt.”

Systems will have to operate in various parts of the world where the threats and terrain will be very different. Kitz said the Army doesn’t want to purchase thousands of the same thing that will operate in these varied environments. A better model is buying a certain quantity and evolving it over time.

“Having that long-term vision of almost commoditized sensing and really have that core infrastructure in our software is the long-term vision that you’re going to see. Because we need to be able to have these adaptable and sensing environments,” Kitz said. 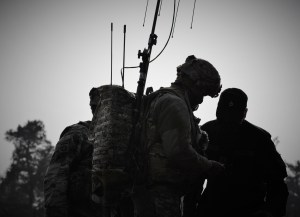