Drones have played a key role during the Ukraine-Russia war for both sides, and the U.S. is providing the Ukrainian military with unmanned systems as well as the means to defeat them.

The new package will include “a suite” of counter-drone technology, a senior Defense Department official told reporters on condition of anonymity during a background briefing on the latest round of military aid for Kyiv.

“This suite of counter-UAS capabilities will be able to detect, track and disrupt” Russian drones, the official said.

The Pentagon did not identify the specific counter-drone systems that will be included in the new round of security assistance or say whether the platforms use interceptors or directed energy weapons to defeat unmanned aerial systems. For a previous security package announced last month, the Pentagon said it would procure VAMPIRE counter-drone systems for Kyiv from L3Harris using Ukraine Security Assistance Initiative (USAI) funds.

The new package announced Wednesday also includes 20 multi-mission radars that can track “a number of airborne objects” including unmanned aerial systems, and mortar and artillery fire, the official noted.

The Pentagon has already committed to providing a variety of drones to Ukraine, including 15 ScanEagle systems, more than 700 Switchblades loitering munitions and about 700 Phoenix Ghost kamikaze drones, according to a DOD fact sheet. It has also provided an unspecified number of mysterious robo-ships that the department refers to as “unmanned coast defense vessels.”

Most of the equipment included in the latest package, which will be procured from military contractors using USAI funds — not drawn from existing DOD stocks — will be delivered to Ukraine in six to 24 months, according to the senior Defense official. 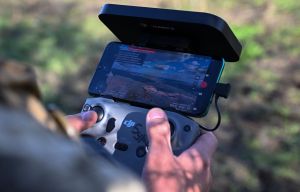