To comply with new federal law mandating website accessibility for the Army’s job postings, the department is turning to its own soldier-coders instead of contractors.

Software developers at the Army Software Factory have been coding a web-based application for Army reservists and National Guard members to access a job board known as “Tour of Duty.” The website remains locked in Army networks, only accessible on government-owned equipment — essentially blocking most reservists and guardsmen from seeing what opportunities there are for active duty assignments.

“Tour of Duty is not accessible and that is the most painful point,” said Lt. Rachelle David, product manager for the software factory’s web-based app, which it’s calling “Carrera.”

The fiscal 2022 National Defense Authorization Act mandates that within a year the website be fully accessible on personal devices. That’s where the Army Software Factory comes in. For the past four months, a team of developers and product managers has been working with other soldiers to design an app that would be both user-friendly and meet the letter of the law.

“[We are] very excited to see that in the NDAA,” David added.

What they have developed so far is a beta version that should be accessible to the entire Army within the next few weeks. Once the initial version is released, the team plans to continuously update to fix bugs and user issues.

When product managers at the factory accepted the problem statement from Army headquarters, their first step was talking to interview soldiers and hiring managers that use the job board. They learned one of the most important things was for it to be mobile-optimized, as many reservists and guardsmen preferred to scroll on their phones rather than search on desktops for volunteer assignments.

“What we are currently developing [is] a tool that anyone can access on commercial internet,” David said. (Anyone with a CAC-card or Army login credentials, that is.)

Soldiers like Lt. Sydney Hall, the senior developer, and David are a part of the first cohort of developers at the factory. By being first in the system, they were a part of laying much of the foundation for how the organization works within its tech development stack, said the software factory’s director, Lt. Col. Vito Errico.

Errico added that due to Carrera being a product from the first cohort, the timeline of the app’s development was largely dictated not by the coding skill of the developers but the Army’s policies for how to handle software and cybersecurity.

The software factory was still in the process of accrediting its stack while the code was being written, putting more burden on the development process to meet the needs of cyber risk management policy.

“The cybersecurity policy in the Army is set up in the legacy mindset,” Errico said.

The team works off of VMWare’s Tanzu development stack. Much of the layers, from the platform to development environment, have been accredited as secure, giving Errico hope of faster turn around times for future products. In other cases — like when the Army contracts with a company to build an app — the app itself needs to go through the accreditation process instead of authorizing the infrastructure used to make the app as secure.

“We practice this idea, if you accredit the infrastructure, platform and app layer you are dwindling the amount of risk controls the developer has to be responsible for,” Errico said.

The Tour of Duty system is also an Army-owned entity, meaning its source code was much more accessible than if it had been licensees IP from a contractor. Errico said the factory has developed some “fun workarounds” when IP issues get thorny, but the ability to access source code helped their app come to life.

“It was not easy,” he said of working with current Army tech policy.

The app aims to not only help end users looking for jobs, but also provide data to leaders who post on the listing. By tracking applications, traffic and other metrics, the app will be a source of both tactical and strategic insights, said Capt. Austin Herrling. the Army Software Factory’s chief data officer.

The goal “is to make our data available to the Army,” Herrling said.

The idea is inline with strategic Army and DOD documents that aim to make data a “strategic asset” instead of just bytes taking up space in servers.

From the rest of the year the Army Software Factory plans to continue to update the app and take the lessons learned in developing it to other projects it has. Factory leaders’ inbox are full of problem statements from across the organization, not all of which they can solve but Errico hopes with more cohorts and teams of soldiers who can code, software will be a larger part of the Army quiver.

“It speaks a lot toward building something that is completely new inside the Army,” he said. 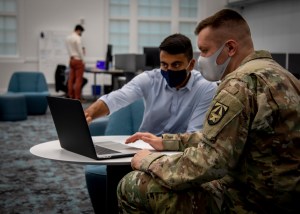