Following the latest wave of deployments, more than 19,000 clinicians now have access to the new technology, which is called MHS GENESIS. It is the first time the technology has been installed in a level one trauma center, according to contractor Leidos.

“It has been a tremendous undertaking to be the largest MHS GENESIS implementation wave within the Military Health System,” Air Force Brig. Gen. Jeannine M. Ryder, 59th Medical Wing commander and San Antonio Market director, said in a press release. “Our medics are engaged, positive and flexible while adapting to this new electronic medical record.”

MHS GENESIS is being rolled out by the Leidos Partnership for Defense Health which includes Leidos, Cerner and other contractors. It is designed to one day be interoperable with the Department of Veteran Affairs health care system so service members can transition between health care systems with the same records.

“The program has continued to operate both on schedule and on budget, despite facing unforeseen challenges due to the COVID-19 Pandemic,” Holly Joers, program executive officer for Defense Healthcare Management Systems, said in a statement. “We are extremely proud of the team’s continued commitment to the mission and ability to react and respond to these real-world events.”

“While we maintain a consistent approach in our deployment strategy, we understand the need to adapt and respond to the unique capabilities and requirements of each medical facility to maintain optimum clinical results,” he said in a statement.

MHS GENESIS is part of a massive multi-billion-dollar program to ensure that the DOD’s and Department of Veterans Affairs’ EHRs are compatible and interoperable. 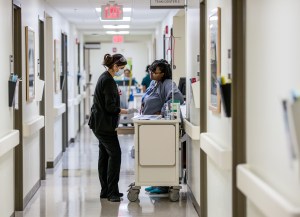