David Spirk, the Department of Defense’s chief data officer, is departing his role Friday, he said in an interview with FedScoop.

Spirk did not discuss his next career step or who his successor might be. His two-year tenure leading the Pentagon’s data management efforts included the creation of a DOD data strategy and implementation of data decrees from top leadership.

He urged the DOD to continue building a data-centric approach to operations so the U.S. military can keep up on the battlefield.

“There are other near-[peer] competitors who are paying attention right now and understand these technologies. If we don’t pick up our pace and continue prioritizing moving towards that open data standard architecture that those data decrees described, then we will fall off pace,” he said Thursday.

Having a strategy in place put the department on a path to develop ways to implement real changes, he said. Building upon that strategy, Spirk lauded the decrees signed out by Deputy Secretary of Defense Kathleen Hicks. In a memo last year, Hicks issued specific guidance on data management for the whole department and called on senior leaders to use DOD’s Advana platform as a central place for decision-making data analysis.

Spirk emphasized the importance of having senior leadership buy-in for reforming the way the Pentagon manages its data.

The new directives “transformed the DOD into that data-centric organization that is critical to improving performance, creating decision advantage at all echelons, ensuring that we maintain a competitive data advantage moving forward,” Spirk said.

Combatant commands such as U.S. European Command and U.S. Indo-Pacific Command have been pleased with the experts the Pentagon has deployed to help them with their data, he noted.

Data management is one of the most important aspects to realizing the Pentagon’s new concept of joint all-domain command and control (JADC2), which seeks to more seamlessly connect sensors and shooters to allow for faster decision-making on the battlefield.

However, Spirk said there should not be a DOD-wide data standard or common data model, asserting that a single bespoke standard is not the way commercial industry does business and will not afford the necessary flexibility.

While he couldn’t say who his replacement will be, Spirk noted that the principal deputy chief digital and artificial intelligence officer is Margaret Palmieri, who previously stood up the Navy’s digital warfare office.

After his two-year stint, Spirk said he’s comfortable leaving now because of the progress that has been made including the creation of the new chief digital and artificial intelligence officer (CDAO), which he praised as “the future” for the Pentagon. The officer will lead the military’s adoption of data, analytics, AI and other digital technologies.

Spirk said the new office is not creating a new management layer, but rather taking the best parts of all the organizations it is overseeing and redistributing them for faster and better decision-making. 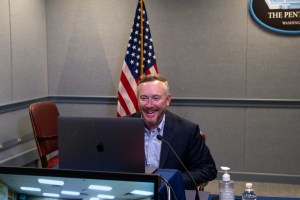