When the technology is ready, the majority of U.S. Air Force combat aircraft deployed to the Indo-Pacific theater in the future should be unmanned in order to “stress” Chinese air defenses, the commander of Pacific Air Forces said Monday.

Beijing’s anti-access/area-denial capabilities are “very robust” especially in eastern China and in the South China Sea, Gen. Kenneth Wilsbach noted at a virtual event hosted by the Mitchell Institute for Aerospace Studies.

A potential solution to the problem is to have a fleet with a lot of relatively inexpensive, “attritable” unmanned systems that could be employed in combat on a large scale to create challenges for enemy air defense units.

“They use up their resources shooting things that you don’t care that they shoot down,” he said. “That would be a capacity that I’m very interested in as we go into the future of being able to amass targets for them to shoot at.”

While the Pentagon is averse to having its pilots killed, it wouldn’t be as big a deal to U.S. military planners if Chinese forces destroyed robotic platforms.

Having a large fleet of drones that are as capable as high-end manned fighters such as the F-35A, which has a price tag of about $80 million per plane, or the Next-Generation Air Dominance (NGAD) systems that are under development, would likely be cost prohibitive, he said.

“What I would advocate for is make the manned aircraft exquisite and the uninhabited aircraft to be less exquisite, slightly more attritable, so that we can have more of them,” Wilsbach said. “We don’t want to make these things so expensive that we don’t want to get them shot.”

Future drones could play a variety of roles including acting as a sensor, jammer, “weapons truck,” or simply a decoy designed to draw enemy fire away from more important platforms, he noted.

The systems, enabled by autonomy and artificial intelligence, could be designed to coordinate their actions and operate in swarms.

“They should talk to one another and collaborate, not only amongst themselves, but also with the manned platform that they’re supporting,” Wilsbach said.

While some drones could be stealthy, not all of them should be. If adversaries can’t detect the expendable U.S. aircraft, they won’t waste any weapons trying to attack them, he noted.

Wargames have suggested that a saturation strategy could be effective against China, according to Wilsbach.

“What we’ve seen in exercises is when you amass the effects and we amass the number of weapons that are going after a particular target, they’ll be able to shoot down some of them because, as I’ve said, they have really good defenses. But they won’t be able to shoot them all down. And it’s the weapon that creates the final effect that you’re looking for that counts,” he said.

Unmanned assets should operate as part of a team that includes manned platforms, he suggested.

Manned-unmanned teaming is “the wave of the future,” according to Wilsbach.

He described a hypothetical scenario in which a few NGAD aircraft could be accompanied by 20 to 40 unmanned teammates.

“You give [the Chinese] a lot more targets to have to defend themselves against,” he said.

“I would contend that, you know, a 50/50 split wouldn’t be enough,” he said. “Especially inside of the anti-area access … region that China has put up, for every manned platform that you have I’d like to have multiple unmanned platforms that can do a variety of different missions.

“The Air Force has not, you know, put down a percentage just yet on what that might look like. But that’s certainly a study that we will be doing I’m sure here in the near future. But just from what I know from air warfare and creating airpower effects for the joint and combined force, I think we’re going to need a lot more unmanned, many of them attritable, so that you can create the effects that you’re going to be looking for.”

Through its Skyborg program and other initiatives, the Air Force is pursuing so-called loyal wingmen and other drones that will be enabled by autonomy capabilities and artificial intelligence.

Wilsbach didn’t offer a specific timeframe for when his vision for unmanned aerial systems in the Indo-Pacific region could be achieved.

“There’s a lot of technology that we still have to develop, but I’m confident and optimistic that we can do it,” he said. 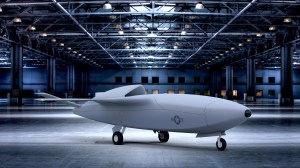