“We use information operations in every cyber mission that we do. It’s that important to what’s going on to be able to communicate a message to an adversary,” Gen. Paul Nakasone told the House Armed Services Subcommittee on Intelligence and Special Operations Thursday. “We need more information operations trained personnel that come to our command. That’s one of the areas that I’m working very, very closely with the services.”

Nakasone’s deputy last week indicated the command is trending more toward an information warfare footing where cyber ops are combined with messaging to an adversary.

“Without a doubt, what we have learned is that cyber effects operations in … more of a combined arms approach with what we call traditionally information operations, is an extremely powerful tool,” said Lt. Gen. Charles Moore. “When you can perform information operations to influence adversaries’ perceptions and maybe their behavior in conjunction with those effects, you can position yourself to see real-time reflections on how they’re assessing what you’re conducting. And then you can stay ahead of their decision cycle, inside of their OODA loop: their observe, orient, decide and action [cycle] … That’s an extremely powerful tool inside the Department of Defense’s toolkit.”

As Nakasone indicated, the military branches and subordinate commands to Cyber Command have taken on a larger role in info warfare for their respective services, reorganizing and consolidating similar capabilities to provide an integrated approach.

Nakasone declined to offer in the open hearing details as to how training can be improved, offering instead to provide specific examples to members in a classified hearing.

Adversaries have become more brazen in the influence and information space in recent years, adopting new tactics and technologies to achieve their strategic interests.

One such tactic is the use of “deep fakes,” which is a seemingly realistic video of a person speaking but in fact, is fake.

Nakasone said he’s seen a growth in influence operations during his three-year tenure as the head of Cyber Command and the National Security Agency, adding deep fakes are one tactic used in this sphere.

It was reported this week that Russia published a deep fake video showing the president of Ukraine appearing to ask his nation to put down its arms and surrender to Russian forces.

Nakasone said the NSA is working closely with its research directorate to better understand anomalies and technologies to determine what is real and fake.

The agency is also partnering closely with the private sector, which has done leading work in this space, he noted.

“This is an area that we continue to watch very, very carefully, act very rapidly in and I think we’ll have a number of different areas that we probably can discuss in closed session as well,” he told the committee. 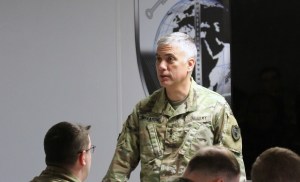