The Army’s top weapons buyer sees loitering munitions as a growing area of technology that could see increased investment from the Department of Defense in the coming years.

These types of systems, sometimes referred to as suicide drones, are different than the larger unmanned platforms that gained fame during the post-9/11 wars such as the MQ-9 Reaper. The latter uses sensors onboard the aircraft to find targets and then launches missiles to attack them. By contrast, when a loitering munition finds its target, it crashes itself into it like a kamikaze.

“We in acquisition, I think we want to take advantage of the amazing innovations in that area in the private sector. So unmanned aerial systems, broadly speaking, are an area where there’s so much out there. We can take advantage of great work that’s already been done. And loitering munitions, something we already invest in, it’s something we could invest more in as the technology improves,” Douglas Bush, assistant secretary of the Army for acquisition, logistics and technology, said Friday during a virtual event hosted by Defense News.

However, the Pentagon needs to work through issues such as command and control and how best to employ them, he noted.

“That’s something I think the Army can work through. It’s certainly a growing area of technology and people are seeing it happen right now” in the ongoing war between Russia and Ukraine, he added.

How many UAS the military buys will be based on assessments of requirements, Bush said.

The annual Project Convergence exercises with prototypes of emerging technologies are an opportunity for the service to experiment and learn, he noted.

The Army can “try things that are very difficult [like] command and control in a contested environment, networking sensors to shooters, and look at it and see what happens and learn both what’s working and what’s not,” Bush said. “I think there’s a lot of goodness that can come out of that.”

Meanwhile, the Pentagon plans to replenish its munitions stockpiles and ramp up production of man-portable Stinger anti-aircraft missiles and Javelin anti-tank missiles that it’s been providing to other nations. The most recent round of U.S. security assistance for Ukraine aimed at thwarting Russia’s invasion included 800 Stingers and 2,000 Javelins, among other weapons.

The Stinger has been in “very low rate” production, primarily for foreign partners, Bush noted.

However, “with enough funding and support from Congress, which I believe we are going to have, we can accelerate that production for the United States in order to replenish stocks of what we provided to other countries,” he said.

He continued: “There’s a lot of details below that though that the team will have to work through. It’s not just the missile, it’s the ancillary equipment that goes with it, the full set of equipment you field — all of those also have to be produced at a faster rate. So I think the line can be accelerated from where it currently is with regard to Stinger. And we’re working through those exact issues right now.”

The rate of production for Javelins is already “quite high,” but it can be increased, according to Bush.

The Army will be working with industry partners and the Office of the Secretary Defense to address that need. It could potentially ask to leverage rapid acquisition authorities such as the Defense Production Act (DPA), a law which enables the federal government to compel industry to prioritize the manufacture of critical items for Uncle Sam, he noted.

Government agencies have leveraged the DPA to address the COVID-19 pandemic and other crises.

“We are very close to being ready to inform Congress of our first moves in that direction,” he said. “Congress wants us to replenish those stocks and I think we can do it.”

The need to quickly address shortages was raised earlier this week during a Senate Armed Services Committee hearing.

“If confirmed, one of my first things to do on day one will be [to] accelerate all equipment and capabilities to both the Ukrainians as we agreed to, and also helping our NATO partners and replenish our stockpiles,” William LaPlante Jr., Biden’s nominee to be the Pentagon’s acquisition chief, told lawmakers.

“I believe we need multiple hot production lines” to produce munitions and UAS, he added. “They, by themselves, are a deterrent and we need to put much more focus on that across the board.” 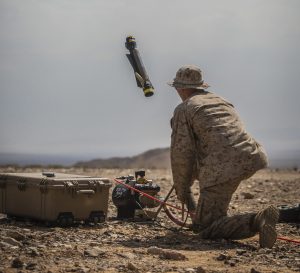