With sights set on enabling data-centric warfare, “America’s contingency corps” is running workloads in the cloud that are unlike any the Army has run before.

Over the last few years, the XVIII Airborne Corps built Dragon Cloud, a unified data fabric that operates beyond the range of traditional kinetic warfare capabilities. Development didn’t come without challenges, military officials said Tuesday — but now, they’re working to ensure the cloud-based benefits they’ve achieved are repeatable across the Army and the Department of Defense writ large.

“When you’re a warfighter, you’re doing your daily job in the Army and you’re just grinding, you’re just getting after it. But you know there’s some part of your job that just absolutely sucks and there’s a better way to do it. So, that’s really kind of the starting point for the cloud efforts inside the XVIII Airborne Corps,” Dragon Cloud Program Manager Chief Warrant Officer 4 Brian Masters said at the AWS Summit in Washington.

When a natural disaster or manmade crisis occurs and the U.S. needs a rapid response force to step in, the XVIII Airborne Corps is prepared to deploy anywhere in the world. Headquartered in Fort Bragg, North Carolina, the corps has four major divisions and eight supporting brigades.

The unit is made up of approximately 92,000 soldiers.

“That’s a large organization to try to make any kind of innovation and digital transformation change,” Masters noted.

Still, in 2020 the group kicked off a weighty effort to become the Army’s data-centric corps that fully applies digital capabilities to harness data as a strategic asset.

To do so, officials partnered with Amazon Web Services and moved to launch what they deem to be the first enduring tactical cloud presence for the conventional Army — Dragon Cloud. Collaborating with AWS, Army Enterprise Cloud Management Agency, Army Analytics Group and others, the team developed a proof of concept (POC) cloud environment at Impact Level 5 (IL5), which hosts unclassified data and workloads compliant with government regulations.

Building on the success of that POC, the corps then went on to develop and refine an operational cloud environment that can process classified data and workloads at Impact Level 6 (IL6).

During the AWS conference panel, DOD officials repeatedly emphasized the importance of stakeholder buy-in when pursuing technology-centered innovation like this.

Chief Warrant Officer 3 Brian McDonell, senior technical advisor for the corps’ 101st Airborne Division, said one of the toughest elements of this effort involved pushing for a more risk-tolerant culture that allowed for deeper experimentation.

“A couple of Novembers ago, we had this environment all done, all built, and I was ready to test it. We had a month-long field exercise going on, and I said, ‘Okay, we’re going to go out and use all this cloud stuff.’ And I had a bunch of commanders say ‘I don’t want to use it,’ because they were scared. There was no trust in it, you know, this is the first time ever and nobody wants to fail. Even though we were just at our own home station, in our own backyard, and nobody was going to die or get fired if it failed, they were still terrified to use it,” McDonell said.

Despite that hesitation from some senior leaders early-on, McDonell said “the nail in the coffin” to get that stakeholder support was to show them the benefits through technology demonstrations, after convincing them it was worth the risk.

“I had a three-star general in Fort Bragg on his Army-issued computer, his unclassified computer. I gave him a URL, and he hit my cloud resource that I deployed, configured and maintained from Fort Campbell, Kentucky — and minds were blown across the world. It was just the craziest thing. Then we started exploring other opportunities. We started trying to connect to organizations over in Europe, and all that buy-in just started to steamroll really fast,” he said.

From there, officials opted to further expand cloud capabilities to host sensitive and secret workloads associated with mission command systems, and enabled them to operate within a globally accessible cloud environment.

“So I had my targeting system at Fort Campbell connected to and sharing data replicated to a target system on-prem over in Germany. And it was real time, no latency. It was great,” McDonell said. “And we’re still doing it today. We’re adding services now, still, to build that environment out.”

As a “server guy in the Army,” McDonell added that the service needs to get to a place where soldiers can stop literally carrying the network on their backs. Cloud-based applications help reduce the burden of all that hardware heavy-lifting.

“SWaP — size, weight and power — is a metric that we typically use to kind of assess the viability of an option. We’re always trying to decrease our size, our weight and improve our power to make us more agile, more lethal and a better fighting force. By going to the cloud in this hybrid environment — and I say hybrid because we’re always going to have some kind of a hardware piece at the tactical edge for that warfighter — but in hosting everything else in the cloud we are experiencing 60% improvement in that [SWaP],” he said.

As this work continues to unfold, those involved are being deliberate about ensuring that the environment can be available worldwide and ultimately make lasting impacts across the Army and DOD.

“We want to try and build the playbook,” Maj. Bill King, division information systems officer in the XVIII Airborne Corps’ 3rd Infantry Division, said. “We’re going to tell you how to get there, and the best way once you get there to do it the fastest.”

Dragon Cloud marks one of multiple siloed cloud-driving efforts within the military that are evolving as the Pentagon prepares to make awards on its Joint Warfighting Cloud Capability (JWCC) contract and ultimately pave the way for interoperable, enterprise-wide cloud services. 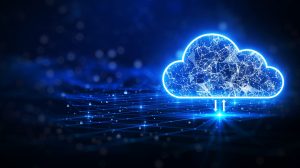