President Biden’s nominee to be the head of U.S. European Command and NATO’s next supreme allied commander in Europe intends to prioritize cyber capabilities and information operations if he’s confirmed by the Senate.

NATO has enhanced its ability to detect, deter and respond to cyberattacks, Gen. Christopher Cavoli told lawmakers Thursday. But more effort is needed.

“Clearly, just like for all of our countries individually, there’s much work to be done for the entire Alliance collectively on this,” he said during his confirmation hearing with the Senate Armed Services Committee. “If I’m confirmed, it will be one of the things I turn my attention to first.”

NATO has taken a number of steps in recent years to strengthen its posture, including establishing a Cyberspace Operations Center to coordinate and synchronize cyberspace ops, and a Computer Incident Response Capability Centre to prevent, detect, respond and recover from cyber incidents.

“NATO’s cyber defense capabilities and capacity are improving, but continuous efforts will be required to reduce vulnerabilities across the Alliance,” Cavoli said in a written response to lawmakers’ advance policy questions.

“This is something I get briefed on literally every week, and I’m satisfied with the level [of security] we have right now. We have to work on it constantly, though, and we do work on it constantly,” he said. “The [NATO] Alliance is working in this direction also … We are initiating the conversations necessary to have collective policy and strategy on network defense, but I believe much more needs to be done.”

Gen. Paul Nakasone, commander of Cybercom, “has set up some great models throughout Europe in terms of defending forward, hunting forward, and doing it in collaboration with our partners or our allies. And I would very much look forward to pursuing all of those with him. It’s going to be of critical importance as we go forward,” Cavoli said.

“Countering multi-domain activities below the threshold of armed conflict requires a whole-of government approach that is most effective when aligned with similar allied approaches,” Cavoli said.

The Department of Defense views the information space as a key arena of competition with adversaries such as Russia and China.

“It is imperative that the United States not cede this key terrain. U.S. Eucom’s operations in the information environment contribute to the command’s and the U.S government’s overall efforts to advance U.S. interests in Europe. If confirmed, we will continue to expand our interoperability with our allies and partners,” he added.

The U.S. and many of its European allies have been supplying weapons to Ukraine to help it fight Russian invaders, to the chagrin of Moscow. NATO’s logistics networks and other assets are at risk being attacked by Russia in the cyber domain as the war drags on.

“I think we’re correct to be waiting for the other shoe to drop,” Cavoli told lawmakers. “There is capability and capacity that could be used. And we are being very vigilant about that as a DOD,” he said, adding that he didn’t want to share more information about that in an unclassified setting.

One issue that has yet to be fleshed out is what level of cyberattack would trigger NATO’s Article 5 collective defense mechanism.

“This, of course, is a very active debate inside the Alliance … but it has not come to a conclusion inside NATO yet,” Cavoli said.

Lawmakers praised Cavoli during the hearing, and he is expected to be confirmed without any significant political opposition on Capitol Hill. 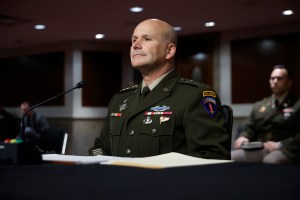