The Army is searching for small businesses to help develop and apply low-cost coating technologies that can protect U.S. aircraft from high-energy lasers and high-power microwave weapon systems.

Directed energy weapons take out targets using highly concentrated electromagnetic energy. The Defense Department has invested billions in directed energy research and development since the 1960s, and in the last decade has started deploying such weapons that can disable adversary electronics using non-kinetic means and harm human or physical objects from long distances.

Through a newly opened small business innovation research (SBIR) opportunity, the Army wants to produce “specific items for any U.S. weapon system, or systems, to improve the survivability characteristics of aircraft, [and] to provide protection and maintain established performance capabilities when attacked by” directed energy weapons, ultimately minimizing any major electronic warfare-caused impacts on flying military vehicles down the line.

Safeguarding both manned air platforms and unmanned drones — and their incorporated sensor suites — is of interest to officials involved. Existing solutions up to this point are not easily replicated or affordable, they noted in their request, but the Army is looking to change that.

In particular, the branch intends to enable quick-reaction shielding solutions that use thin paint-like or stick-on coatings and are easy to apply on in-the-field aircraft. Technologies with commercial analogs are also deemed highly desirable in the request.

“[A] limited capability that could be extended may provide services [with] an immediate solution — while enhancements are co-developed and tested with the government resources,” officials wrote.

This program is one piece of the Army’s broader directed energy strategy that instructs the fielding of such weapon systems and countermeasures against them, as the branch works to transform itself into a multi-domain capable force.

The work is slated to unfold over three phases, of which the second and third will likely involve classified efforts. If all goes as planned, the SBIR project will result in relatively inexpensive prototypes — less than $10,000 for each coating application on an aircraft — that can defeat certain directed energy air platforms or weapons systems at kilometers of distance.

“The Army [SBIR program] encourages small businesses to submit innovative technology solutions to solve current and future Army research and development needs, such as this one,” a spokesperson told FedScoop on Friday.

Proposals from interested vendors must be submitted by June 15. 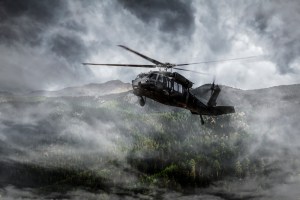