The protection of radars and communications equipment is gaining higher visibility within the Department of Defense following the 2020 creation of its electromagnetic superiority strategy, according to a top official.

Electromagnetic superiority takes the holistic view across the entire spectrum as opposed to focusing on singular areas. As a result, one of the areas that has been neglected and overlooked over the years is electronic protection, said David Tremper, director for electronic warfare in the Office of the Undersecretary of Defense for Acquisition and Sustainment.

“Historically, what I’ve been seeing is that when we have a conversation about EMS survivability, it immediately migrates towards EW and the question is [with] EW, how are you going to achieve EMS survivability and how does our EW map against their EW? What I’ve been pointing out is that our EW systems don’t attack their EW systems; our EW systems attack their radars, their comms and their PNT,” Tremper said at a virtual event hosted by the Hudson Institute Wednesday. “The question we should be asking is: How do our systems stand up to EMS/EW attack, right? How do our radars perform, how do our comms perform, how do our PNT perform?”

Tremper has championed electronic protection since taking his position, noting that it often gets cut from budgets and overlooked because it isn’t thought of until conflict starts and enemies begin actually jamming friendly systems. Contrast that with the use of jamming and sensing systems during the so-called competition phase of operations short of armed conflict, which the U.S. currently finds itself in with top competitors such as Russia and China.

Tremper pointed to the conflict in Ukraine, noting the importance of assured communications and how they are a particularly important aspect of warfare.

With the new strategy and subsequent implementation plan, finalized last year, electronic protection is coming more into the fold.

“When you start to see that and we see things like EMS survivability showing up in the requirements process and we see exercises showing what the vulnerabilities are when our EMS-using systems are exposed to EW, now we’re starting to get that senior-level attention, we’re starting to get the requirements that people’s feet are being held to the fire that they need to address EMS survivability,” he said.

The superiority strategy and implementation plan created a senior steering group that focuses outside of electronic warfare and creates connective tissue across the electromagnetic spectrum communities, Tremper said.

Prior to this, the electronic warfare community would talk about challenges to radars and communications systems, but there wasn’t a cross-cutting organization to work together to communicate the issues.

Now, the electronic warfare executive committee can take lessons learned about what electronic warfare effects had on radars and communications systems and bring them to the senior steering group to share with the other electromagnetic spectrum communities, Tremper said.

“From a programmatic perspective, we’re seeing the requirements migrate to EMS survivability so that now the EW community can highlight where we have EP vulnerabilities and now we have the infrastructure created through the implementation plan that allows that message to be propagated across EMS users and then action to be taken and not perceived as an aggressive move on one community or another,” he said. 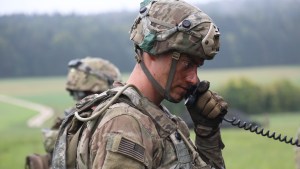