As the Army charts a course to modernize its force by 2035 with a focus on multi-domain operations, the service is also looking to fundamentally transform its medical capabilities to take advantage of and move at the pace of technological advancements.

The 22-page document is meant to guide the Army’s requirements, priorities and direction of medical modernization efforts for 2035 and beyond. A key assumption in the Army’s development of the strategy, among others, is that there will be vast developments over the next decade-plus in medical and non-medical technologies that will affect the Army’s future medical capabilities.

The strategy explains that the Army aims to transform its health system “through 2035 to be a more adaptable medical force capable of harnessing, integrating, and utilizing future technology on the battlefield to save Soldiers.”

“Since the last transformation with Air Land Battle over 40 years ago, Army medicine has continuously placed new technology on top of existing doctrine,” Richardson says. “This is no longer adequate. Modernization must be baked in, not bolted on; evolving doctrine to the pace of proven technologies and treatment modalities.”

The future envisioned in the strategy is one where Joint All-Domain Command and Control (JADC2) is pervasive and the formations, commanders and others operating in disparate warfare domains are widely connected. And not only are networks powering the widespread sharing of data to support things like advanced analytics and artificial intelligence for better situational awareness, but the Army also expects by then it will have comprehensively fielded autonomous systems and vehicles and other emerging capabilities, like the Integrated Visual Augmentation System (IVAS) platform, to aid in medical care.

“By 2035, the [Army Health System] will transform its organizations into modernized, tailorable and scalable [multi-domain operations, or MDO]-capable formations that are strategically positioned and able to leverage national-level capabilities and authorities,” says the strategy. “The AHS MDO force will combine tailored integrated formations of networked manned and unmanned platforms, sustainment, communications, intelligence, and protection capabilities from the individual to theater.”

The AHS must have the flexibility and capability to quickly adapt to novel injuries and threats in the future operating environment, the document notes.

“The ability to establish ‘care webs’ that allow for vertical, horizontal, and digital synchronization and integration for the care of the wounded, ill and injured will be critical to ensure the AHS provides the quickest, most efficient and appropriate care to our soldiers on the battlefield and beyond,” the strategy says.

While humans are at the center of the strategy, there is a great deal of emphasis on human-machine teaming. Medical formations will “leverage advanced robotics, AI, and optionally-manned systems with humans in- or on the-loop to enable decision making to inform advanced clinical care and prioritize evacuation,” the document says. “These technologically advanced systems will move casualties to the medic, aid the medic in treatment and movement of casualties, or serve as an evacuation platform with autonomous or human-provided care.”

In anticipation of this future state, as well as the corresponding rapid evolution of medical threats, the Army says it must look beyond the 2030 time frame and begin to invest in the research of disruptive technologies that drastically change how it will operate, and treatment modalities. it calls for the AHS to prioritize, develop and capitalize on rapid advancements in medical innovation and disruptive technologies.

“These areas directly nest with the [strategy] and address both required capabilities and capability gaps,” the document says. “We must realign and focus resources in these areas to ensure that the AHS will keep pace with operational advancements and expand treatment modalities to support the future force.”

Officials from Army Futures Command were unable to comment on the strategy prior to the publication of this story. 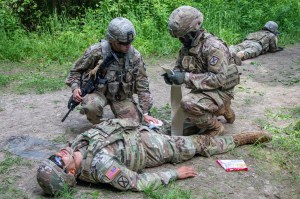