The new commander of the Air Force’s information warfare unit wants to increase and bolster partnerships to beat back adversaries in the information space, a lesson learned in his previous role at U.S. Cyber Command.

“As we’ve seen about how information is used, I think information can be used to build coalitions in competition and I think sharing and exposing malign activity and sharing insights with our allies and partners, I think, is a key activity in competition to build those alliances and partnerships. That’s one thing I saw as the director of operations,” Lt. Gen. Kevin Kennedy told reporters Thursday.

Kennedy, who was most recently the director of operations at U.S. Cyber Command, assumed command of 16th Air Force in a July 21 ceremony and will now be the unit’s second ever commander. He takes over for Lt. Gen. Timothy Haugh, who will head to Cyber Command to serve as its deputy commander.

16th Air Force was created in 2019 to fuse various disciplines and commands within the Air Force to break down barriers for a more efficient information warfare entity. It serves as the service cyber component to Cyber Command and the National Security Agency converging disciplines such as cyber, intelligence, surveillance and reconnaissance, electronic warfare, information operations and weather.

Kennedy said he saw firsthand at Cyber Command the importance of partnerships and that is something he hopes to bring to 16th Air Force.

“When we were in crisis, I think that’s also a way to contest misinformation … then as we go into crisis types or conflict type activities sharing of information really enables joint operations to be more effective,” he said. “I saw that play out as director of operations and I think as the commander of 16th Air Force, working with our wings and partners and the other Air Force components, I think we can bring that to bear.”

Partnerships have been a top priority for Gen. Paul Nakasone, the commander of Cyber Command and director of NSA.

Cyber Command has worked with several partner nations to build their capacity in cyberspace and share threat information that benefits the broader cybersecurity community.

One example includes so-called hunt forward missions, in which teams from Cyber Command physically deploy to nations at their request to hunt for malicious threats on their network.

These operations are mutually beneficial because they help bolster the security of partner nations and provide Cyber Command — and by extension, the U.S. — advanced notice of adversary tactics allowing the U.S. to harden systems at home against these observed threats.

This week Cyber Command shared technical details of malware targeting Ukrainians based on information the Ukrainian government shared with the command.

Outgoing Cmdr. Haugh also noted that at the creation of 16th Air Force, he underestimated the importance partnerships can play.

“An area that we assumed that we would be able to maximize some of the effects we’d have was through partnership. We definitely underestimated the opportunity space there,” Haugh told reporters prior to his departure.

Kennedy is also taking other lessons from his time at Cyber Command, such as the recognition of how information can be a critical enabler.

“It’s clear to me as information warfare and using information, it’s ever-present during competition as we see crises across the globe, I think it is the dominant activity and then a key enabler or if not the essential enabler as we enter into conflict,” he said. “My role as the director of operations and now the commander of 16th Air Force, I see as we hunt, expose, contest, and when necessary, defeat adversaries in the information domain, I can see that my understanding of how we integrated the cyber element of national power into that as we bring those other enterprises of the ISR, EW and our weather enterprises to bear on that as well.” 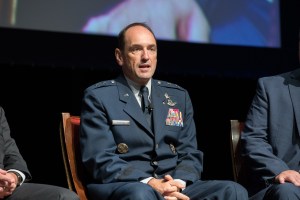