The schedule for the next round of flight tests for the AGM-183A Air-Launched Rapid Response Weapon (ARRW) is “extremely aggressive” as the Pentagon races to field new hypersonic missiles to keep pace with China, according to a Lockheed Martin official.

Lockheed has been developing the system for the Air Force as part of a rapid prototyping program to give the service greater ability to destroy high-value, time-sensitive targets and heavily defended land targets. Following the completion of the booster test series last month, the program is about to move into what officials call “all-up-round testing.”

“We have more missiles to build and more flight tests to get through and complete than we’ve had at any other time in this program, with the goal of reaching the early operational capability in 2023. So, there’s just a lot going on and it’s an extremely aggressive schedule,” Brian Schappacher, Lockheed’s deputy program manager for the Air-Launched Rapid Response Weapon, said during a Mitchell Institute podcast released on Saturday.

“That keeps me up at night, just making sure that we can — we can meet all of those commitments,” he said, adding that the flight test program has been structured so that each subsequent test is “a little harder” than the previous one.

The ARRW is a boost-glide system that relies on a rocket to propel the weapon to hypersonic speeds greater than Mach 5. The most recent test series, which is now completed, was mainly focused on validating the performance of the booster, according to Schappacher.

Hypersonic missiles are expected to fly at extremely high speeds with great maneuverability. The performance requirements create major challenges for weapons designers and engineers who must create a system that can survive in those extreme operating conditions.

Schappacher didn’t announce a start date for the all-up-round testing. In a press release July 13, the Air Force said it will begin “later this year.”

During the most recent booster test on July 12 off the coast of California, the platform reached hypersonic speeds after being launched form a B-52 bomber and “primary and secondary objectives were met,” according to the release.

Despite the aggressive test schedule and the 2023 target date to achieve early operational capability, Schappacher said he’s “confident that we’re gonna be able to get there.”

However, questions remain about the ARRW’s future even if the all-up-round testing is successful.

“We haven’t made the decision on what do we do when the current demonstration program finishes,” Assistant Secretary of the Air Force for Acquisition, Technology and Logistics Andrew Hunter told reporters July 16 at the Royal International Air Tattoo just days after the most recent successful flight test of the system, according to Breaking Defense.

“What we’re looking at is our weapons mix and our munitions mix for our highest priority operational problem sets which are tied to the pacing threat, and that’s what’s really driving decision-making,” Hunter said. “You obviously don’t wouldn’t buy something that doesn’t work. But even if it does work … it’s got to be the right contribution to the overall weapons mix.”

The Pentagon is pursuing several hypersonic weapons projects in addition to the ARRW. The Air Force has a Hypersonic Attack Cruise Missile (HACM) program that aims to use scramjet technology instead of a boost-glide system to achieve hypersonic flight. The Defense Advanced Research Projects Agency has been testing scramjet technology as part of its Hypersonic Air-breathing Weapon Concept (HAWC) initiative.

Meanwhile, the Army and Navy are pursuing their own platforms known as the Long-Range Hypersonic Weapon (LRHW) and Conventional Prompt Strike (CPS), respectively. The Army is aiming to field the LRHW next year, while the Navy plans to field CPS systems on destroyers by 2025. 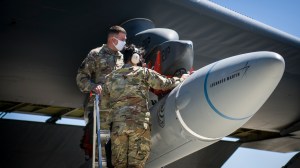