AUGUSTA, Ga. — The Army is developing a pilot to better train offensive cyber operations personnel across the military on behalf of U.S. Cyber Command to address readiness gaps.

Offensive cyber personnel across all the services were not ready to perform their job on day one, so the Army, serving as the executive agent for advanced cyber work-role curriculum development, is piloting a new course and curriculum for all the U.S. military branches.

This new initiative, which will entail a distributed model where courses will be taught at locations in Texas, Fort Gordon, Georgia, Fort Meade, Maryland, and Washington, is about six months to a year from being operational, Maj. Gen. Paul Stanton, commander of the Army Cyber Center of Excellence, told reporters at the TechNet Augusta conference on Tuesday.

“This is a joint endeavor, in coordination with U.S. Cyber Command with the other services to produce service members that are ready to be part of their cyber mission force teams,” he said, noting the pilot is being executed with Cybercom’s training directorate, the J7. Cyber Command is responsible for setting the cyber training standards across the entire Department of Defense.

Defensive cyber ops were historically more difficult to train for because there was no template for how to do it. Offensive operations, on the other hand, benefitted from a legacy of NSA operations allowing cyber curriculum developers to rely on a playbook of sorts when developing the military’s cyber force.

However, what the DOD is discovering is that not every offensive cyber warrior needs to be trained to those high-end NSA-type standards right away to be effective in their missions.

“Not every offensively oriented soldier needs to be trained to a comparable standard to execute a foreign intelligence mission on behalf of the National Security Agency,” said Stanton, who oversees the Army Cyber School.

Instead, the new curriculum and approach deals with evaluating the risk profile for operators on certain missions. The skills needed to carry out the high-end type of foreign intelligence ops that the NSA conducts are extremely complex given the types of targets and the need to go undetected.

The military, however, whose main mission is warfighting and not foreign intelligence, isn’t always as concerned with being caught.

“We want to be able to train service members to be able to execute missions that fall into that different risk profile and be able to execute those missions earlier in their training and development than matriculating all the way through a very long, lengthy and quite difficult training model to become foreign intelligence certified on behalf of the NSA,” Stanton said. “Working in coordination with the NSA, just looking at where’s the right breakpoint, if you will, that allows a service member to then execute operations that fall under a different risk model and then subsequently continue their education to become certified at the NSA standard.” 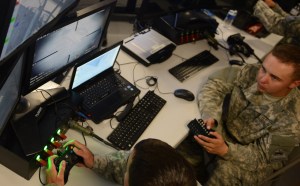