The Army is about to begin a pilot for implementing a “bring your own device” (BYOD) concept that will allow soldiers to connect their personal communication and IT devices to Army networks.

The effort will begin in September or early October, according to Lt. Gen. John Morrison Jr., deputy chief of staff, G-6, who serves as the principal military adviser to Army leadership for planning, strategy and implementation of command, control, communications, computers, cyber and information technology for worldwide operations.

“You will see us increasingly use commercial capabilities,” he told reporters Wednesday during a roundtable at the AFCEA TechNet Augusta conference.

“Over the course of the next month to 45 days, we will start a pilot for bring your own device … and what that means is you can now, much like you do in the commercial sector, use your personal device like you have in your hand man. But we will put a secure capability on it that allows you to log back into the Army network and conduct official business,” he said.

The initial focus will be on the National Guard and Reserve components, but the pilot will also be expanded to include active-duty troops as well as soldiers stationed outside the continental United States.

“It’s gonna be a fairly broad pilot that we’re looking to do, you know. We’ll work through the physics of how many users it’s going to be. We have the ability to go up to several thousand. But we’re pretty excited about it because we’ve been talking about it a long time,” Morrison said.

The Army will onboard an initial cadre of “champions” for the initiative, which will include “technical users” and “regular old people” that will be using the capability. Having the technical users talking with other users at the beginning is expected to yield “amazing TTPs,” Morrison said, referring to tactics, techniques and procedures.

“As we start doing the broader onboarding, it really just — it just makes it so much easier,” he said.

Army leaders hope the BYOD concept will improve operational effectiveness and save money.

Cybersecurity has been a major concern in the past when it comes to allowing troops to plug their personal devices into the Army network.

“We have layered in security all based off of zero-trust principles,” Morrison said.

“What is very, very important is we have done cybersecurity assessments all the way along this journey. Because if you don’t bake in cybersecurity at the very, very front end and do it continuously, then we’re obviously opening up some holes in our swing,” he said. “That’s been one of the big concerns about anybody using their personal device to conduct business. But since it’s done in a virtualized environment that is hosted up in the cloud through the DOD, it’s very, very, very secure. We have had it red-teamed ad nauseam by elements outside of — outside of the Department of the Army, and the assessment that came back in … said the path that we’re on is one of the most mature that’s out there.”

“We’re pretty excited about this,” Morrison added. “It’s taken us a while to get to this point, both from a policy perspective and from a building out the environment [perspective]. But we are right on the cusp of implementation.” 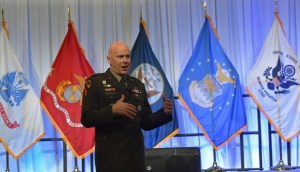