For the Army’s main contribution to the Pentagon’s new concept for fighting wars, demonstrating technology interoperability is more important than transitioning new systems into programs of record, the service’s No. 2 said.

Project Convergence is the Army’s contribution to Joint All-Domain Command and Control (JADC2), the Defense Department’s way ahead for conducting operations in which sensors, shooters and networks will be better connected to allow warfighters to make smarter and faster decisions while linking the services and their platforms — along with international partners — together. The other services’ JADC2 initiatives include the Air Force’s Advanced Battle Management System (ABMS) and the Navy’s Project Overmatch, though little is known about the Navy’s effort because officials are tight-lipped about it.

“Our Project Convergence exercises, the main thrust is to demonstrate interoperability among the joint force and also with our partners and allies that are participating,” Gabe Camarillo, undersecretary of the Army, told reporters Wednesday following a presentation at the Potomac Officers Club Army Summit.

“Success isn’t necessarily the transition of hardware or capabilities into a program of record. Success is really the hallmarks of being able to show that interoperability and to be able to define the data architectures that are needed to enable data driven decision-making on the battlefield. That’s ultimately what the goal is,” he said.

While the Air Force is developing ABMS, essentially an architecture to improve command and control and battle management, Project Convergence isn’t developing a thing, per se. Rather, it’s an experimentation venue for joint and, for the first time this year, international partners.

“The outcome isn’t necessarily always just a thing,” Camarillo said. “It’s a system-of-systems engineering challenge. It is an architecture that enables the data flows to happen where they need to go, and to accomplish the missions that are needed across the joint force. The Army is one piece of that as part of the joint force.”

In true experimentation fashion, the focus of Project Convergence is to validate that architecture to ensure there are the right interfaces between systems and the right data standards.

“How do we show what network requirements might correspond to the fielding of those systems so that we can adequately plan for them in those data architectures?” Camarillo said. “The outcome shouldn’t necessarily have to be a program of record, but rather how our programs of record align within an architecture that enable JADC2. In that sense, we are very closely aligned with the department strategy.”

Others across the joint force have had positive things to say regarding the work the Army is doing to facilitate experimentation with Project Convergence.

The goal for the forthcoming Project Convergence in the fall is to understand what data requirements would be needed to pass off to partners and allies in an operationally relevant environment, Camarillo said.

“How would we effectively do that, given all the different range of sensors and weapons systems that we employ within a mission thread?” he said. “We’re doing it really by looking at specific mission threads that are defined for the Project Convergence exercises.”

For the office leading the JADC2 effort, one top official noted that it’s not all about the systems.

“We have to understand how we plan to operate. JADC2 is not just about systems. If our thoughts about JADC2 start and end with the systems, we have not done our job,” Rear Adm. Susan BryerJoyner, deputy director for command, control, communications and computer/ cyber systems, J-6 for the Joint Staff, said at the AFCEA Technet Augusta conference last week.

While some officials such as Army acquisition chief Doug Bush and Deputy Secretary of Defense Kathleen Hicks, have offered that there needs to be higher coordination within the DOD on JADC2, Camarillo said the Army is closely aligned with the department’s strategy for Joint All-Domain Command and Control and that Project Convergence is nested in that approach.

“Neither the secretary nor I are satisfied with the — where we are in the department on advanced command and control,” she FedScoop and other reporters who accompanied her on a multi-state trip last week. “Every day in the department you can find examples where the speed and quality of decision-making [at the] tactical level, operational level, up at the strategic level, can be vastly improved and create that edge that we need for the future. A lot of good work going on throughout the department [but] what I’m really focused on right now is taking that … good work that’s going on and scaling it to the enterprise level.” 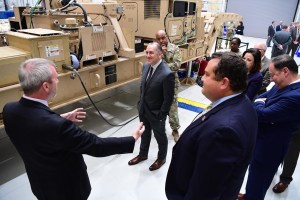