L3Harris expects to deliver its new counter-drone system to Ukraine within nine months of being put under contract, the company told FedScoop.

However, when the new weapons tranche was first announced Wednesday, it was unclear how long it would take for the VAMPIRE and other systems to be delivered because the technologies will be procured from contractors through the Ukraine Security Assistance Initiative (USAI) fund rather than from a drawdown of Pentagon stocks, which had been the practice for most previous tranches of U.S. military aid to Ukraine since Russia’s invasion in February.

“This announcement represents the beginning of a contracting process to provide additional priority capabilities to Ukraine in the mid- and long-term to ensure Ukraine can continue to defend itself as an independent, sovereign and prosperous state,” Pentagon Press Secretary Air Force Brig. Gen. Pat Ryder explained in a press release.

National Security Council coordinator for strategic communications John Kirby told reporters that the delivery timelines are “going to depend quite frankly on the item that we’re talking about or items and how fast it can be procured. And so not everything will have to necessarily be quote-unquote ‘built’ as of today, but some stuff will probably need some production time to develop.”

During a brief briefing at the Pentagon on Wednesday, Undersecretary of Defense for Policy Colin Kahl said “we’re talking about systems that will take months to get on contract and you know, one, two, three years in some instances to arrive in Ukraine.”

In response to a question about laser-guided rockets, Kahl said “some of those systems and rounds will probably be provided to the Ukrainians within the next nine months, and additional systems and rounds could take a year or two.”

L3Harris later told FedScoop that “once L3Harris is under contract, we expect to deliver [VAMPIRE systems] within the nine-month window.”

It is unclear how long it will take the DOD to put L3Harris under contract. Kahl told reporters that broadly speaking the Pentagon “will endeavor to get the contracts filled out as quickly as possible and get stuff on the road.”

On its product data sheet, L3Harris depicts the system targeting a Group 3 UAS.

The company describes the capability as “a portable kit that can be installed on most vehicles with a cargo bed for launching of the advanced precision kill weapons system (APKWS) or other laser-guided munitions.”

It can attack airborne targets such as drones, or ground targets, and was designed to fit into pickup trucks or other vehicles with a flat surface. The design also allows for fast set-up, and installation can be completed in approximately two hours by two people using common tools, according to L3Harris.

The system “uses small missiles essentially to shoot UAVs out of the sky,” Kahl told reporters.

L3Harris said it has supported the Ukrainian Ministry of Defense with military technology “for several years.”

“From the outset of the current conflict, our advanced tactical radios and robust SATCOM terminals enabled Ukrainian warfighters to communicate crucial information, while our night-vision and electro-optical capabilities allowed the Ukrainian military to track enemy forces and better plan both broad strategies and tactical responses. Our VAMPIRE system will provide the Ukrainian people with even more robust capabilities as they continue to defend their country and democracy in Europe, and we will continue to offer our steadfast support of their mission,” the company said in a statement. 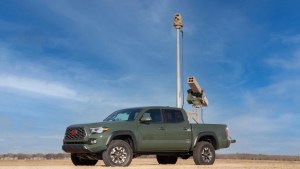