NATIONAL HARBOR, Md. — The Air Force’s next-generation stealth bomber, the B-21 Raider, will be publicly unveiled in early December, according to the service’s top weapons buyer.

“We are still working to nail down all of the plans, but it will be the first week of December,” Assistant Secretary of the Air Force for Acquisition, Technology and Logistics Andrew Hunter told reporters at the Air Force Association’s Air, Space and Cyber conference on Tuesday when asked about the timing of the reveal.

Northrop won the contract to build the platform in 2015.

“Northrop Grumman and the U.S. Air Force have been closely collaborating on the B-21 unveiling for quite some time. Rolling out or revealing a new aircraft is a natural progression of any program, and more details will be forthcoming soon,” the company said in a statement.

First flight of the system is slated to occur sometime next year, depending on how things go with ground testing, according to Northrop Grumman officials.

In a statement, Doug Young, sector vice president and general manager of Northrop Grumman Aeronautics Systems, described the B-21 as “the most advanced military aircraft ever built.”

The Air Force plans to procure at least 100 B-21s. Six test aircraft are currently in various stages of assembly in Palmdale.

Air Force officials have disclosed few details about the Raider, which is expected to be stealthy and capable of penetrating advanced enemy air defenses. The system was designed using digital engineering.

Air Force officials have said the B-21 will be part of a family of systems, but they’ve backed away from the idea of building new long-endurance drones specifically to accompany the Raider into battle.

Air Force Secretary Frank Kendall said the Defense Department will be able to say more about the program, which is currently highly classified, in the future.

“We try to manage that in a way which kind of balances letting the stakeholders in the public understand what we’re doing with keeping our potential adversaries from understanding” more about the system, Kendall told reporters on Monday at the conference. “Fortunately, we are going to be moving forward at some point with being more open about the B-21.” 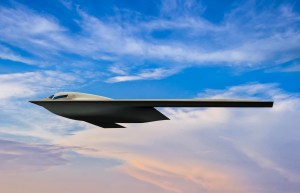