On Aug. 20, 2011, Marc Andreessen published “Why Software Is Eating the World.” In the decade since this pivotal article was written, an entire new generation of “digital native” companies have emerged that have forced slower-moving incumbents out of business. Technology has been devouring the world, and it also eats its own.

The U.S. military is considered the best in the world. With a budget larger than the next nine militaries combined, the Department of Defense (DOD) outspends, out-equips, and out-trains its competitors. It is also an industrial-age, hardware-centric organization that has the most, the biggest, and the best large capital investments: tanks, ships, aircraft, satellites, and everything in between. Unfortunately, in today’s world, hardware is “old-school” – low-margin, commodity products that are manufactured, stored, shipped, consumed, and discarded. The DOD accomplishes many incredible things, but it also shares with almost all other federal agencies the common trait of lagging woefully behind the commercial software industry’s state of the art in everything from automating back-office functions to providing digital warfighting services to its customers.

Fortunately, the DOD has a monopoly on the nation’s warfighting functions, which insulates it from the usual forms of market competition. Yet this very monopoly is also the root cause of many of the worst problems when it comes to the DOD’s failure to adopt new technologies, change its legacy workflows and processes, and design and experiment with new operating concepts. Within the U.S. government, the DOD does not experience the kind of brutal, capitalist, Darwinian journey by which incumbent organizations face off against hungry new start-ups and risk getting pushed to the side. Equally problematic, the massive DOD bureaucracy struggles with the kind of periodic “tech refresh” that has been instrumental to commercial industry success. While it is insulated from market competition within the U.S. economy, the DOD is not immune from the kind of revolutionary, secular, and wide-ranging technological changes happening outside the government. Nor is it immune from the threat of competition with other militaries around the world. Either the DOD will change itself, or its competitors will force it to change. After it might be too late.

For the United States military to retain its dominant position in the future – which is not a guaranteed outcome – the DOD needs a new design and architecture, based on technology, that will allow it to be far more flexible, scale on demand, and adapt dynamically to changing conditions. And it must do so at a dramatically lower cost. The DOD’s systems will need to support dramatically faster decision-making and execution speeds; allow for rapidly updating and modifying systems; lower the cost structure of building and deploying these systems; and upend the marginal cost and speed of delivering new functionality.

It is extremely important for DOD to begin the transition from an industrial-age, hardware-centric organization to a digital-age, software-centric one. To address the challenges of doing so, the two of us, one with over 26 years of experience in Silicon Valley and the other who served for 36 years in uniform, wrote “Software-Defined Warfare: Architecting the DOD’s Transition to the Digital Age.” In the computer industry, “software defined” is a broad architectural concept that drives different core design decisions. These design decisions turn a lot of disconnected hardware products into an integrated whole that can be operated and managed as a single platform. It also takes control and complexity, which is typically distributed all over the place, and centralizes it where it can be simplified, managed, and scaled. In military terms, this is a version of centralized direction and decentralized execution: the best of both worlds.

We describe how lessons and experience from the commercial tech industry’s journey can help inform breakthrough solutions to big problems in the DOD and other federal government organizations. The best principles and practices that emerged in commercial industry over the past few decades on how to design computer software and systems for squeezing out the maximum performance at lowest costs, are directly transferrable to the DOD. We outline nine concepts and present an overall architecture recommendation that we consider crucial for accelerating the transition to a software-centric future.
Our paper is not a so-called “recipe for success.” It is a framework, a blueprint for change at a crucial period in the Department’s history. We do not claim that hardware has become irrelevant. It is as important as ever. Yet the principles we outline are designed to make hardware far more effective, to allow much more agility and rapid adaptation during future crises and conflicts. We also do not claim that machines will displace people. The approach described in our report opens up incredible new opportunities for human-machine teamwork, in which the roles of humans and machines are optimized based upon what each does best.

War is the ultimate human endeavor. It is both art and science. The art side of the art-science equation remains as important as ever. With the proliferation of new technologies and a shift to a data-centric environment, the science part of the equation is becoming increasingly consequential. In future crises and conflicts, the side that adapts faster and demonstrates the greatest agility may well gain a significant tactical and operational advantage. As stated in the recently-published Strategic Competitive Studies Project (SCSP) report, titled Mid-Decade Challenges to National Competitiveness, “A military’s ability to deploy, employ, and update software, including AI models, faster than its adversaries, is likely to become one of the greatest determining factors in relative military strength.” That is a powerful and bold statement. We agree with it. The stockbroker’s warning that past performance is no guarantee of future results applies as much to warfighting as it does to investing. There is no time to waste for the DOD and the rest of the federal government to begin the transition to a digital age.

Nand Mulchandani was the first Chief Technology Officer for the Department of Defense Joint Artificial Intelligence Center (JAIC). He is now the CTO for the CIA. Lieutenant General Jack Shanahan (USAF, Ret.) was the inaugural Director of Project Maven and the JAIC. 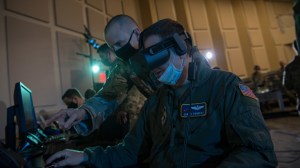 Software-defined warfare: Architecting the DOD’s transition to the digital age