“The pieces of Maven that have been just revolutionary have been in the computer vision space, and specifically on [geospatial intelligence-types] of capabilities,” Palmieri told DefenseScoop at the Association of Old Crows annual convention in Washington.

First conceptualized around 2017, Project Maven was created to accelerate AI and machine learning capabilities that could enable U.S. service members to digitally detect and follow objects, or humans of interest, from media captured by the military’s surveillance aircraft, satellites and other assets — and ultimately apply data technology to better grasp combat operations. The program originally launched under the purview of the Office of the Undersecretary of Defense for Intelligence and Security (I&S), but its place is shifting as associated capabilities are evolving and the DOD is reorganizing.

Earlier this year, Pentagon leadership confirmed plans to split the requirements for some of Maven’s elements between the National Geospatial-Intelligence Agency (NGA) and the DOD’s new Chief Digital and Artificial Intelligence Office (CDAO). I&S is still responsible for broad oversight of the program.

However, the timeline for those transition plans was recently set back — along with other DOD modernization and innovation efforts — because Congress did not pass a final defense appropriations bill for fiscal 2023, prior to the Sept. 30 deadline. Federal agencies, including the Defense Department, are currently operating under a CR that will expire Dec. 16.

“Really the one thing that has prevented the formal transition is that [continuing resolution] and we’re just waiting to go through that process. But I would say the teams are up and running, and engineering — they’re ready to go. We’re excited to see what they’re putting together,” Palmieri said.

Despite that appropriations-related holdup, officials from the CDAO, NGA and I&S “have conversations pretty frequently,” she added.

This week, the executive board for Maven that the CDAO sits on with I&S, NGA and the Office of the Director of National Intelligence is expected to meet, she noted.

“We get together often to talk about that transition,” Palmieri said, without providing more details on the agenda for the upcoming discussion.

In Maven’s next chapter, all lines of its effort related to geospatial intelligence, or GEOINT, will fall under NGA. Other pieces of the project that are not associated with GEOINT work will move to Palmieri’s team at the CDAO, she noted.

“And there are some other capabilities there I can’t talk about here, but we will look at how to build out the same type of approach Maven used for these non-GEOINT types of use cases,” she said. 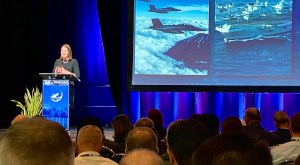