Updated at 4:45pm, Nov. 9, 2022: This story has been updated to include comments from Paul Puckett about his next steps, and to reflect that he hasn’t publicly stated whether he’s leaving the Defense Department.

CHANTILLY, Va. — The Army’s cloud guru charged with shepherding IT modernization is about to complete his three-year term.

Paul Puckett was hired by the Army in 2019 from private industry to help the service pursue cloud adoption.

“In 16 days, who’s counting, will be the completion of my three-year term with the United States Army,” he said at AFCEA Belvoir’s Industry Days conference on Tuesday. “Looking back at the last three years, I would say that we’ve had some pretty strong momentum, but there’s more that needs to be done.”

Puckett was brought in to lead the Army’s Enterprise Cloud Management Office and help the service get more serious about moving to the cloud. Since he jointed the government, his office has been elevated to an agency under the chief information officer, with new authorities and responsibilities.

Puckett noted this week that when he was initially hired, the Army secretary at the time described a vision of going “all-in” on the cloud, an effort which would be completed in about three years and eliminate the need for the management office.

“I’ve seen that done before,” Puckett recalled saying at the time. “I’ve seen the ‘all-in’ movement, I’ve seen the lift and shift, get there by hook or by crook, kind of a thing. Let me tell you, I’ve seen it a few different times and it just leads to failure.”

It won’t work, he said, because this approach just shifts problems to another environment. Instead, he suggested the Army start small and build skill sets.

The Army released its new cloud plan in October, replacing the prior one from 2020.

Additionally, the Army is readying a $1 billion contract vehicle to support its hybrid cloud development. The Enterprise Application Migration and Modernization (EAMM) contract will be run out of the Enterprise Cloud Management Agency.

“My next steps are still being evaluated but, like my entire career, my next role will remain focused on bringing people, process and emerging technology together to accelerate outcomes supporting our national security strategy,” Puckett wrote in a message to DefenseScoop on Wednesday.

He declined to say whether he plans to remain at the Defense Department or move to a different organization, reiterating that his next steps are still “being evaluated.” 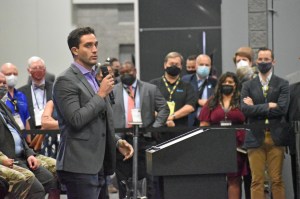