Looking to move to the next phase of its electronic warfare planning tool, the Army will shift to biannual software updates to be more responsive to operational requirements.

Described by officials as the glue holding all EW capabilities on the battlefield together, the Electronic Warfare Planning and Management Tool (EWPMT) is a command-and-control planning capability that allows forces to visualize the potential effects of these types of weapons and chart courses of action to prevent their forces and systems from being jammed during operations.

The program just wrapped up the first increment, which included four capability drops, which are incremental software deliveries that each build upon the previous one. However, the Army is now getting away from the term “increment” as it moves forward.

“The term ‘increment’ is going away, as that implies that the software would be delivered and then be in the field for a year or two while another version is being developed. That’s one thing we looked at and decided was not responsive enough to operational requirements,” Liz Bledsoe, product manager for electronic warfare integration at Program Executive Office Intelligence, Electronic Warfare and Sensors, told DefenseScoop in an interview.

Bledsoe said starting in fiscal 2024, the Army will be providing two software updates per year to the program.

“We’re doing a new contract competition, which basically expands the scope of the contract to include software development, software sustainment, which includes fielding and the integration of capability,” she said. “We’re going to open the aperture a bit for continual improvements on capabilities currently within EWPMT as well as adding new capability once we get those new requirements approved.”

Raytheon had been the prime contractor for the first increment, but now the Army is looking to inject more industry competition into the program.

“It was just a good point to pivot because EWPMT just completed [initial operational test and evaluation] last year,” Bledsoe said. “Looking at the operational environment and the potential for changing doctrine, as well as technology and the threat, this was a good time to pivot the program so that we could make it a little bit more responsive to the operational environment. In addition, the period of performance for the existing contract is ending and we did not have a desire to extend that beyond the current period of performance.”

The Army hosted an industry day Nov. 10 at Aberdeen Proving Ground, Maryland, to inform industry about the way ahead and its acquisition strategy.

“One of the things that really came off industry days that people want to know, like, ‘are you really competing this?’ And yes, we really are competing this,” said Maj. Chase McCabe, assistant product manager for electronic warfare integration. “The goal right now, I think, is for us to inject innovation. That’s the motto we’re going with.”

The anticipated award for the new contract is first quarter of fiscal 2024, McCabe said. It will be a single award with a one-year base period, three-month phase in and a four-year option.

The new contractor will inherit the current system as it is, though Christopher Voinier, chief engineer for electronic warfare integration, said there are things under the hood that can be improved such as the software architecture. Currently EWPMT version one, which contains all four capability drops, includes enhanced electronic warfare targeting, asset tasking and playbook options.

Officials have said the next phase of the program will focus on GPS in denied environments.

Officials also said they are anticipating an updated requirements document for the program in fiscal 2026. However, while they have seen some drafts, they noted it was premature to say what new capabilities or requirements the Army is looking for.

EWPMT has already been fielded to some units for some time to meet urgent needs, but now the program has funding to begin fielding across the Army in fiscal 2024-2027. 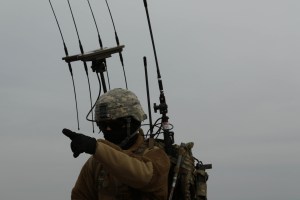