On Monday, dozens of loitering munitions, also known as kamikaze drones, hit targets in and around Kyiv, according to Reuters. Iran has been supplying Moscow with these types of weapons.

“We do know that Iran continues to provide drones to Russia, which Russia is using to kill Ukrainians and to hit civilian infrastructure, including over just the last, you know, 24 hours,” Kirby said.

“I’m not going to get ahead of security assistance packages that haven’t been announced yet,” he added. However, “we’re going to continue to work with Ukraine in lockstep, day after day, to provide them the kinds of capabilities that we think can be helpful to them in terms of their self-defense. And right now, air defense is the most important requirement for them, clearly evidenced by what we’ve been seeing, again, over just the last 24 hours alone, if not recent weeks. So we have — we have provided some advanced air defense capabilities already, many of our allies and partners are providing various levels of air defense capabilities. And we’re going to continue to look at that going forward.”

Kirby didn’t identify specific systems that might be provided in the future and he would not confirm press reports by CNN and other outlets that Patriot air-and-missile defense systems will be included in the next tranche of U.S.-provided security assistance for Ukraine.

The Pentagon has been tight-lipped about some of the counter-drone capabilities that it’s committed to Ukraine, although it has acknowledged some of them, such as the VAMPIRE system.

Meanwhile, the Department of Defense is providing American-made kamikaze drones to Ukraine, including the newly developed Phoenix Ghost. The DOD is also accelerating its efforts to bolster U.S. defenses against these types of weapons. 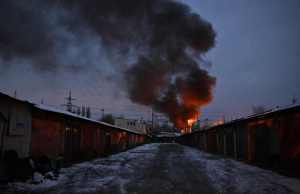