The $275 million package, announced Friday, continues a trend where the United States provides equipment to help Kyiv defeat Moscow’s drones. These systems are being drawn down from Defense Department stocks and the Biden administration is also procuring these types of capabilities from military contractors using Ukraine Security Assistance Initiative (USAI) funds.

“This security assistance package will provide Ukraine with new capabilities to boost its air defenses in addition to providing critical equipment that Ukraine is using so effectively to defend itself on the battlefield,” the DOD said in a press release.

A Pentagon spokesperson declined to provide more details about the counter-UAS tech due to operational security considerations.

In the past DOD officials have sometimes disclosed what drone-busting systems will be sent to Ukraine, but at other times they have been tight-lipped.

Drones have played a key role during the Ukraine-Russia war for both sides.

U.S. military officials are also worried about the threat that UAS pose to American forces, which the new Missile Defense Review highlighted.

“Most of our training right now is on force on force. Both sides are going to have a ton of little drones [in future conflicts]. We have to get comfortable operating in that environment,” Marine Corps Commandant Gen. David Berger told DefenseScoop on Wednesday during a Defense Writers Group meeting.

“Do we have the countermeasures in place? Yes. But for every measure and countermeasure that cycle never ends. And as fast as we get a countermeasure in place, the other side or a commercial vendor is going to invent something to overcome that. We can never rest easy on that. But what we have to do is get comfortable with operating in that environment with them flying around and it doesn’t bring you to your knees, it doesn’t scare you … You have to figure out how to operate in that environment. And we’re doing that now in every single training environment. But … we’re going to see a lot more [drones], not less,” Berger added.

The Defense Department is accelerating its search for new tech to counter kamikaze drones, also known as loitering munitions, and other UAS threats.

Other weapons and equipment included in the Ukraine package announced on Friday include: 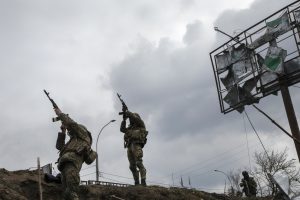