The Department of the Navy says it has moved all its 472,000 users to a Microsoft-based collaboration platform, marking a major milestone in the broad migration to a cloud-based office suite of tools.

The Office 365-based system gives sailors, Marines, civilians and contractors access to Microsoft Teams, chat and remote-based work systems. The project, called Flank Speed, represents the Navy’s version of a broad new cloud-based DOD365 remote and in-person suite of tools that provides a similar experience to the Commercial Virtual Remote environment created for the pandemic, but it has enhanced security measures that can handle information at the military’s Impact Level-5.

“The Navy has successfully enabled accounts for all users originally intended to have access to the Flank Speed collaboration capabilities in [fiscal 2021]. Full migration of remaining users throughout the Navy will continue through the rest of [fiscal 2022],” a Navy spokesperson said.

Some related tasks are incomplete. Users that remain in an on-premise Navy email system must still be migrated to O365’s email system. A Navy spokesperson said the department plans to move the last 272,000 email accounts to the Microsoft Office email system by the end of the fiscal year.

As of now, 200,000 users have been fully migrated to both the collaboration platform and the cloud-based email system. The old system users are being moved off of is an on-premise email system run by the Navy.

The Navy had missed initial deadlines in its migration when 138,000 users had yet to be transferred — or “enabled” in the Navy’s terms — to the new collaboration tools by Oct. 1. Now that all users in the department have access to the Microsoft tools, the next step remains moving them to the cloud-based email system that will give them a new “us.navy.mil” address, according to the spokesperson. 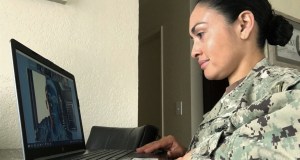