Sherman will help oversee the tech office’s stand up to full operational capability along side Jim Mitre, a former DOD strategist who returns to government service.

The new office reached initial operating capability and is expected to be fully up and running by June. Sherman told reporters Wednesday that he will continue to fully cary out his CIO duties while also helping to integrate the department’s data analytics and AI capabilities as acting CDAO.

“I am honored to be able to help get this organization stood up,” Sherman said.

The new office comes as the department seeks to modernize its digital infrastructure and innovation. In the fiscal 2021 National Defense Authorization Act, the Joint AI Center was shifted from the CIO’s office to report directly to the deputy secretary of defense. With Sherman in as acting CDAO, the CIO once again is overseeing the JAIC (even though he technically wears two separate hats in doing so).

The CIO’s role will continue to focus on cybersecurity and the core IT infrastructure of the department while the new CDAO will be responsible for creating policy and requirements on the data analytics and AI tech that uses that infrastructure, a memo from the deputy secretary states.

The memo, dated Feb. 1, gives fresh detail on how the new office will integrate into the department’s management structure. CDO Dave Spirk will continue to report to the CIO, but his office will be transferred to the CDAO’s, the memo states. DOD’s own data platform, Advana, will also be transitioned from the chief financial officer’s office to the CDAO’s office. The move will include shifting Advana’s lead official, Gregg Little into the CDAO.

All undersecretaries will be expected to coordinate with the CDAO on policy concerning AI and data analytics, according to the memo. Beyond just policy, the new official will have the responsibility to “selectively scale proven digital and AI-enabled solutions” and “surge digital services” in crisis.

Sherman said that the office presents a unique opportunity to combine the efforts of all the component organizations, like DDS’s software development talent, the JAIC’s focus on AI and the CDO’s responsibility to curate data sets. A part of the office’s new responsibilities will be a review of different data authorities across the department.

The office is expected to be fully operational by June 1 with a permanent officer at the helm. A senior official said some candidates have been identified but no one has been selected. 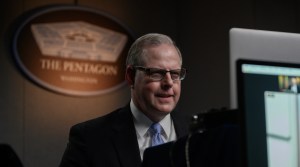